I have to admit, I’ve been pretty delinquent in terms of decorating for baby #2, especially since it’s going to be a girl, and you’d think I’d be all over the pink and the ruffles and oh my cuteness available on Pinterest.  But no, I haven’t done anything decorative.  Not. One. Thing.  I created gender reveal cards, and picked up some pink baby clothes on Craigslist, but that’s it.  The reason why?  These kids are sharing a room.  Yup, that’s right.  In this age of large houses and every-kid-gets-their-own-room, my babies will learn to share.  Well, it’ll be more like big brother will learn to share with the little screamer coming into his life.  But that also means that the already decorated gender-neutral room that has served him so well all of these 3 years will also be more than adequate for the little one coming in the fall.

We never actually did much to decorate for baby #1.  There was one wall painted blinding yellow, a red Ikea rug on the floor and my big white sofa hogging up space in what used to be a den, aka “get away from the husband while he’s watching horror movies and watch Pride and Prejudice instead” room.  We replaced the white couch with a white crib, added a black dresser, some Ikea curtains and called it quits.  The color scheme was “just color”, since I couldn’t decide on a true theme.  To that end, I hung up brightly colored lanterns and made one of them into a hot air balloon, added the rainbow merry-go-round bookshelf, and a simple crane mobile. 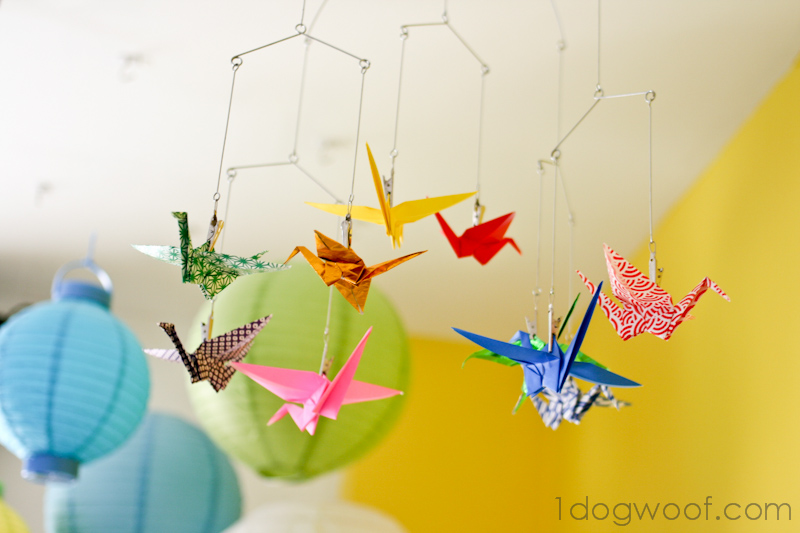 Inspiration for this?  Lying in the OB’s office, week after pregnant week, staring at the ceiling and looking at the teeny tiny beautiful crane mobiles they had hanging right above your head.  Those were made from driftwood and the cranes were maybe only 2 inches long.  But I wasn’t going to go truckin’ around for driftwood, and there’s no way I could fold anything into something 2 inches long, so I went the easy route.

First, I dug out my seldomly used origami paper and made a bunch of cranes.  I found instructions in some seldomly used origami books I had, but I’m sure you can find instructions all over the internet.  Then I bought this photo mobile from Amazon, which comes with clips at the ends to grab your photos.  I used the clips to grab on to the cranes instead.  Seriously simple.  To hang, I used a 3M sticky hook and some fishing line from the ceiling, and voila – bright and colorful, in stunning 3D, and moves when the AC kicks on. 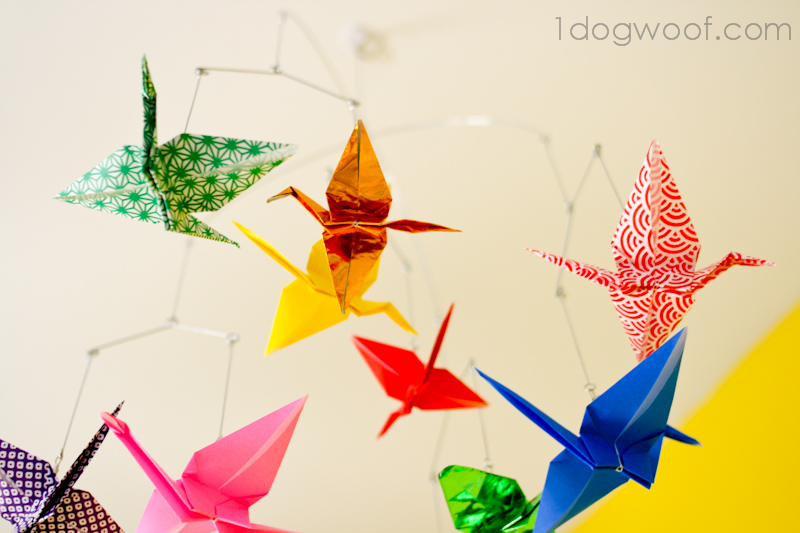 For baby #2 – maybe I’ll switch out the cranes for something else that can be hung from clips, but otherwise, there are no plans to add pink, or ruffles or dolls or name signs or anything else that might make J feel like he’s lost his world to a new baby.  Well, maybe a name sign, but only if I make two.