I realize our trip was over a while ago, but I’m still recapping it. For you, and for me too. It was an amazing experience, and as much as I want to share it with you, I also want to remember it for myself, so I can look back someday and wonder what I drank to make me want to do this in the first place, and why I may or may not ever want to do it again! On today’s leg of our cross country road trip, we’re driving from Rawlins, WY to Elko, NV. It’s another 8 hour drive, but with kids, it becomes close to 11 hours from hotel door to hotel door … 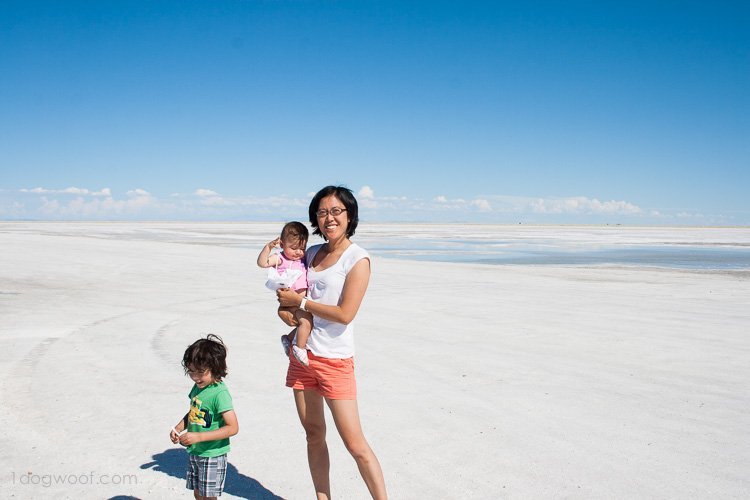 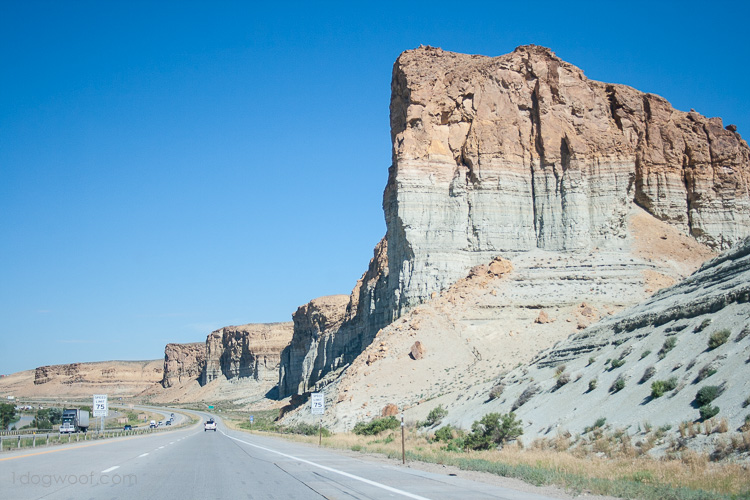 The highlight of this leg of the trip is without a doubt, the Bonneville Salt Flats in Utah. Before we even started on the trip, my husband was saying we have to drive out on the flats because that’s where all the land speed records have been broken, and movies were filmed there, and we can pretend our family station wagon is a race car. Does it help to know that we get up at 7:30 am on weekends (Eastern time) to watch Formula 1 races? Pretending to be race cars is serious business in our family! 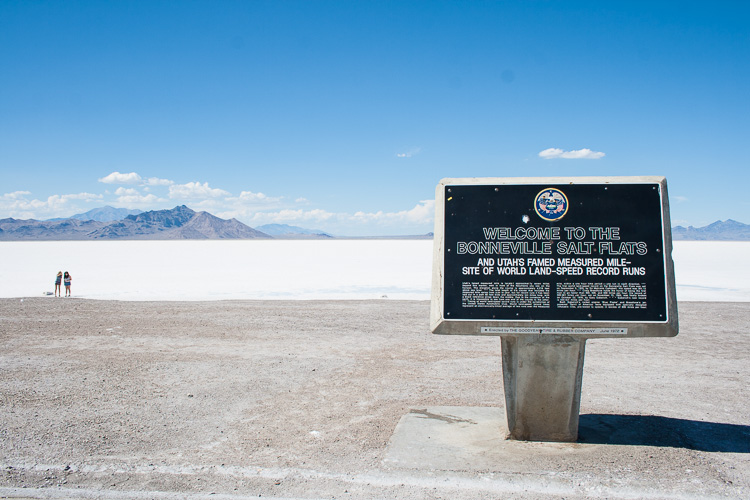 Given that we had this Yakima rack sitting on top of our car, I really REALLY wanted a “car” picture – you know the kind – as if we were uber sporty adventurous people rockin it out on the salt plains with nothing but a bottle of water and our Yakima rack holding our essential survival gear, making it look like we just jumped out of some car commercial. In my mind, I keep seeing a Subaru perched at the edge of a cliff overlooking the Grand Canyon, but you know, the Bonneville Salt Flats is the same, just white. And instead of a Subaru and an uber adventurous couple out survival camping, here we are, a family of 4 in  VW Jetta Sportwagen carrying what we consider “essential”, which includes bottles of sweet tea in a cooler, baby food, a GoCrib, a stroller, and oh yeah, that gallon of Benjamin Moore Kendall Charcoal Advance paint that the movers wouldn’t carry. #lifeofacrafter, I tell ya. 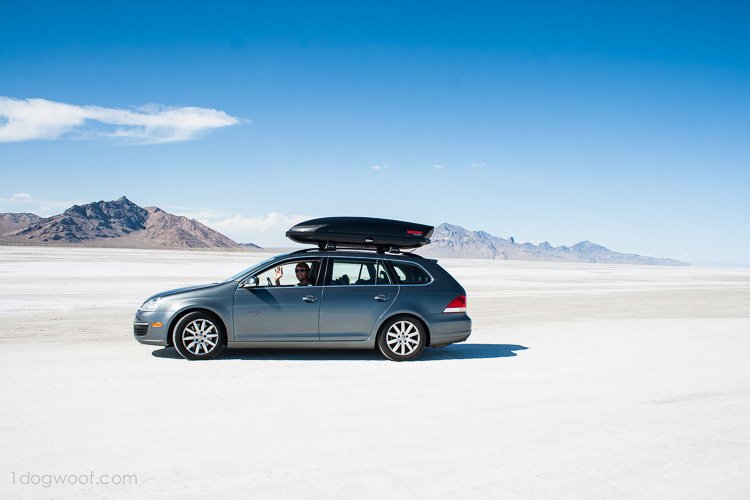 This next photo is commercial worthy right? 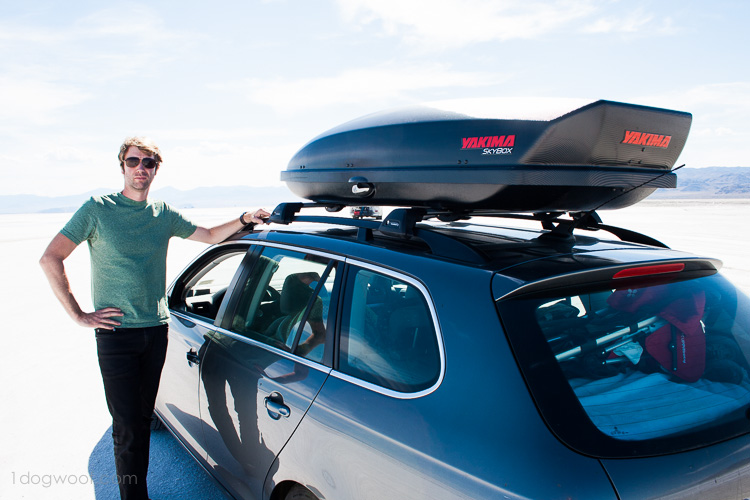 We even stopped at a Walmart before we got to Salt Lake City to buy the kids sunglasses because we were told the salt plains were going to be BRIGHT. LM wore hers for exactly 5 seconds, enough to take a picture and that was that. 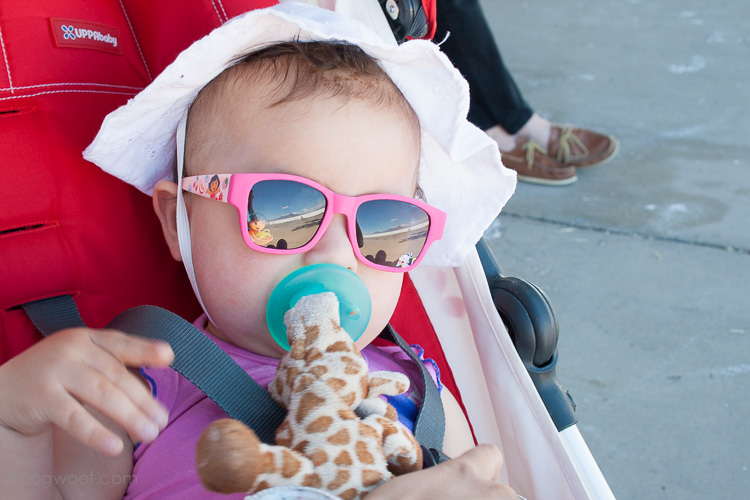 Does anyone know why the rock is red outside of Salt Lake City? The whole place was gorgeous, which is probably why we got lost there. You’d think that following I-80 is pretty easy, but somehow we got turned off of it and were heading to the North Pole before it occurred to me that the navigation on the car shouldn’t say we were heading “N” on I-80. Good thing we were only about 15 minutes off course. 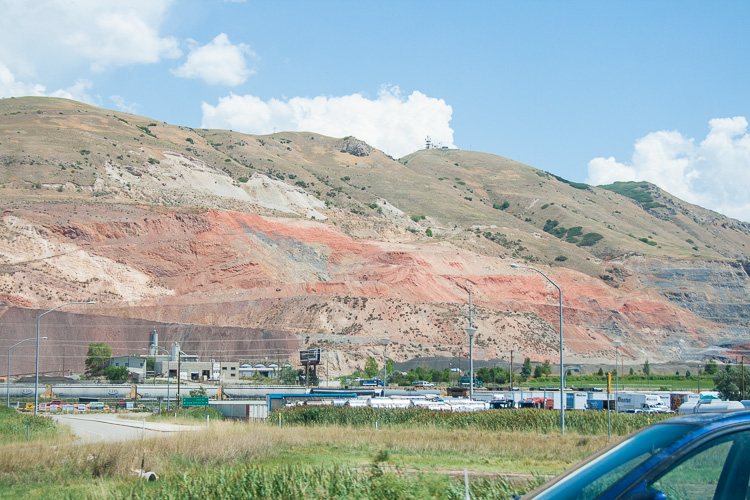 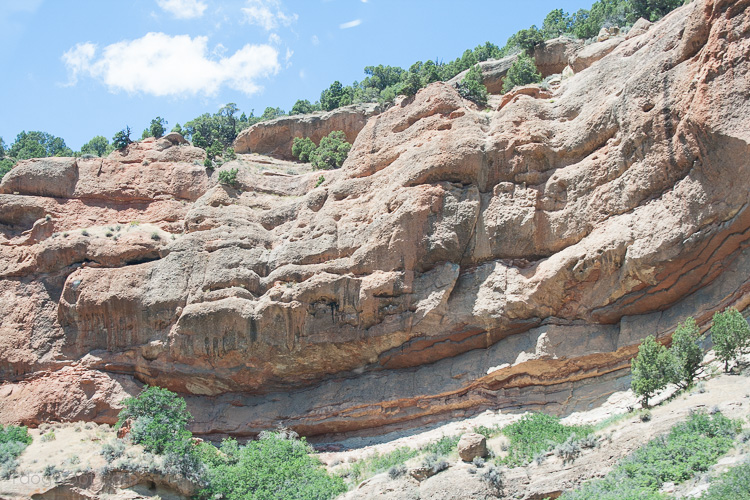 After passing the Great Salt Lake, we hit the salt. Lots and lots of salt. So much salt that there was a Morton’s salt factory right outside Salt Lake City. And more salt. 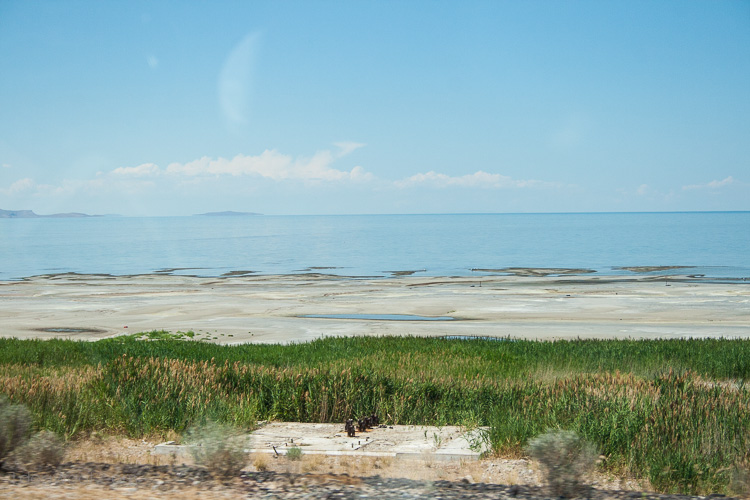 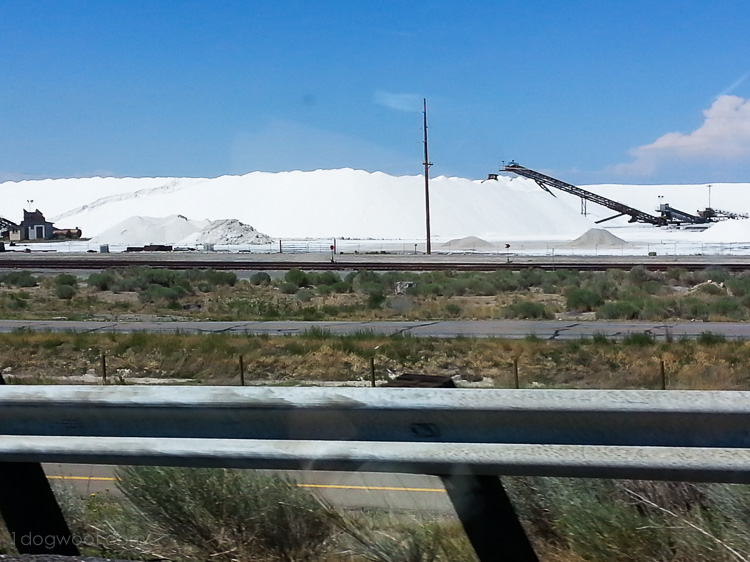 To see the salt flats, you can stop at a rest stop on I-80, get out and walk out onto the salt. It’s pretty nifty if you only have time for a quick stop, and a bathroom break. But if you really want to get wild, then I highly suggest you take the next exit and drive to the Bonneville Salt Flats access point. It’s 5 miles off the highway, but you don’t feel the distance AT ALL because everything is so freakin’ flat the scenery doesn’t ever seem to change. Just flat. Then mountain. All of a sudden, you realize the highway is iiiiitty-bitty off in the distance, even though it felt like you just took the exit a second ago. 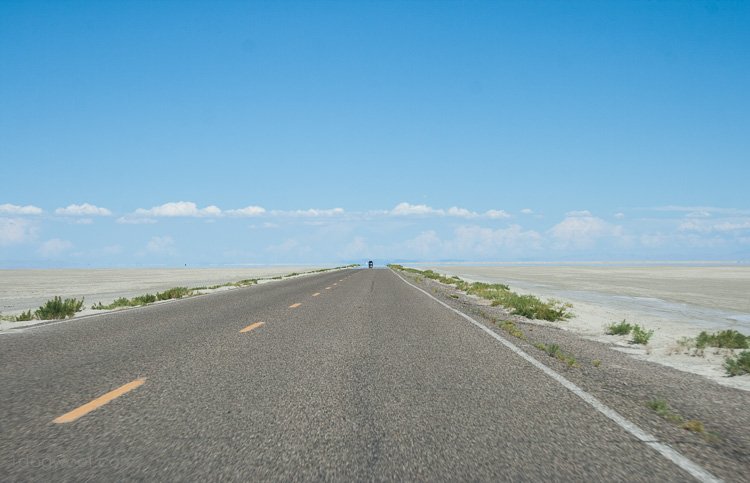 Anyways, now you’re on the flats. You can keep going as your own risk, or stop where the other cars are and just take some photos. We saw a U-Haul moving van coming off the flats looking like he drove through a ton of snow. Oh but wait, it’s not snow, it’s SALT, caked on all his wheel wells. 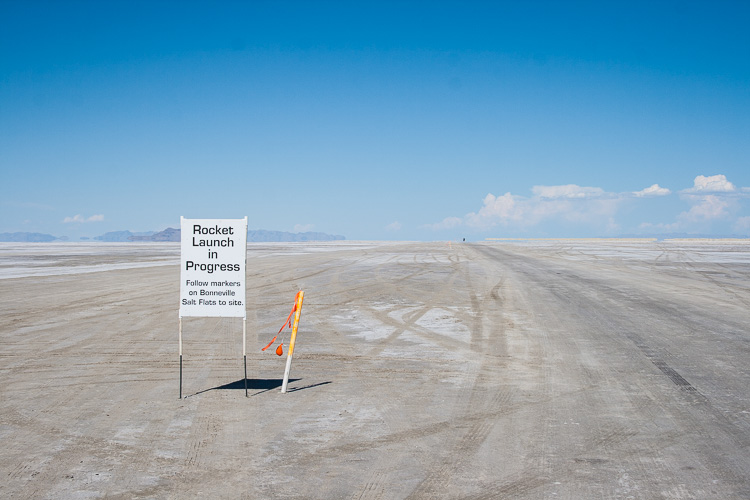 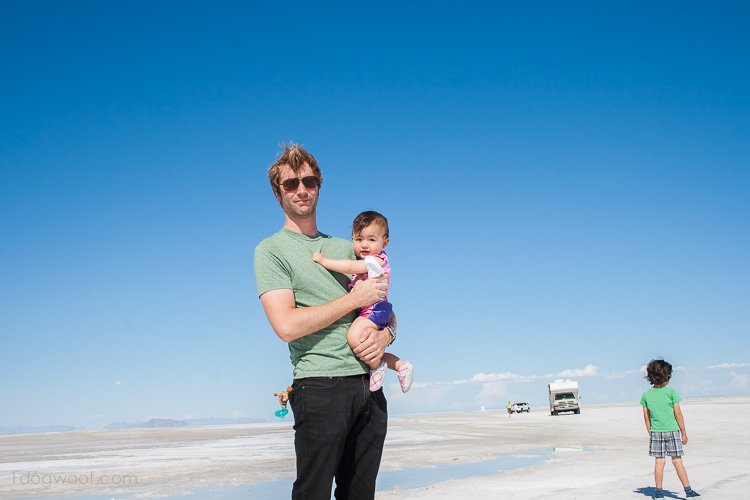 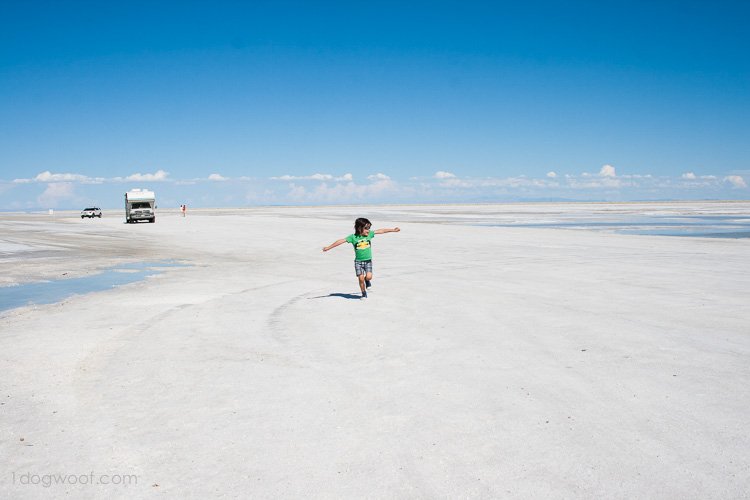 I absolutely LOVED being out on the flats.  There was just something so freeing about all that open space.  And it didn’t give me the heebie jeebies either, like the desert did on other days.  I don’t know why, maybe it was because there was a large group of Korean tourists right next to us and the guy with the RV just hanging out all by his lonesome enjoying the fresh air.  I wanted to stay longer but there was still highway waiting to be conquered!  And as soon as I got back in the car, I realized how parched I was.  Even though it was over 94 degrees outside that day, it didn’t feel hot at all on the flats because of a great breeze.   The wind, plus the dry air and maybe even the salt all around you just sucks the moisture out of you.

Still, if you get a chance to go – GO!!!  What a great experience, I can’t emphasize it enough!  And it was free, if you don’t count the gallons of gas it’s going to take you to drive all the way out to the middle of nowhere.  This side of the road attraction was waaaay better than World’s Largest Truck Stop; it was like stepping into a different world and into the movies a bit – completely surreal and memorable.

Well, after this, there wasn’t much else to look at. We entered Nevada, found a place to sleep and looked forward to the end of the trip! 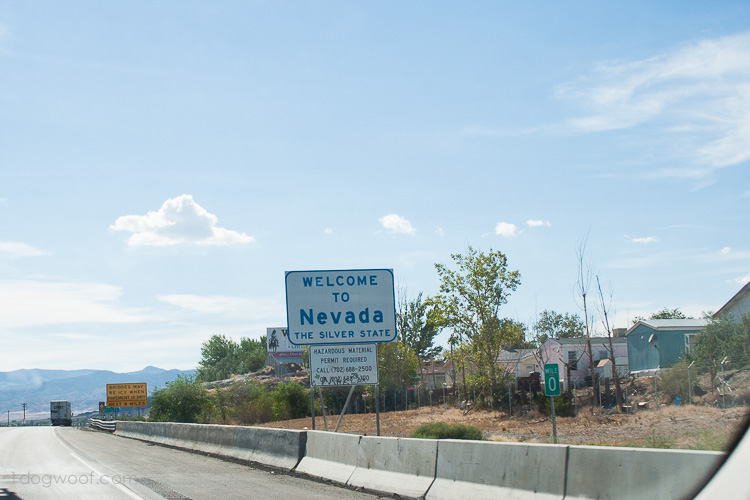