I know it’s been quite a few days since my last post and if you follow on Instagram or Facebook, you know that we’ve arrived in sunny California safe and sound.  We’re currently in corporate housing and will be living out of suitcases and whatever we packed in our Yakima SkyBox until September, which kind of keeps the stress levels a bit high.  We’ve heard that the housing market here can get a bit crazy, and the schools are competitive, so we’ve spent the last week chasing down a permanent address so we can start to build a life!  So yes, after a week on the road, we’ve spent the last few days on the road all day, driving around town, checking out neighborhoods, schools, houses, shopping plazas and getting accustomed to the traffic.  But, as of right now, after driving a few hundred miles just around San Jose in a few days, we have secured a house and hopefully a school for J, and I can finally sit down and write a recap of Day 3 of our road trip – “The Great Plains” – without completely passing out.

As I said in my last post, we pretty much agreed to do one big stop for each leg of the trip, instead of trying to see every little road-side attraction.  “We agreed” means ” I planned while Drew drove”.  The stop for this leg was the railroad museum at Cody Park in North Platte, Nebraska.  Yup, still in Nebraska!  (We used to think Pennsylvania, with its 250-ish exits on I-80 was huge….and then we drove into Nebraska and started our number shock when the exits numbered in the 400s.  Whooo, big state! ) 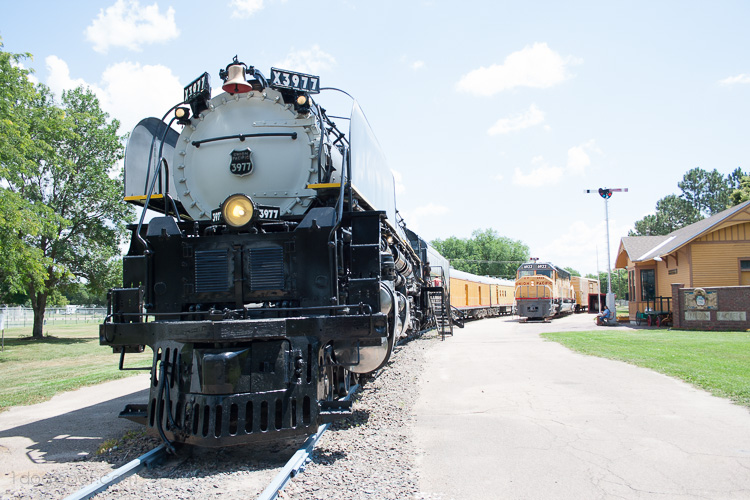 I found info on the Cody Railroad Museum while researching on RoadTripAmerica, and thought it’d be a good stop for J, who’s all into trains right now.  The museum boasts the largest diesel locomotive ever made and a ginormous steam locomotive.  I didn’t think he’d be impressed by the statistics.  The real draw was that he’d be allowed to CLIMB on them, and walk through the carriages, as the museum is IN the cars themselves. 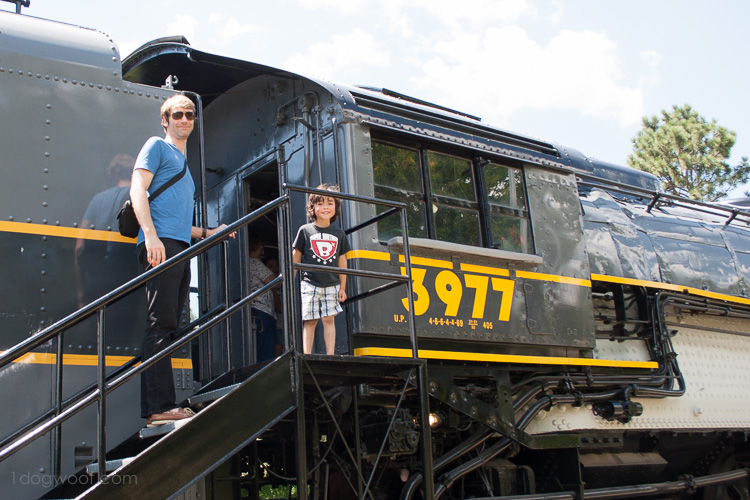 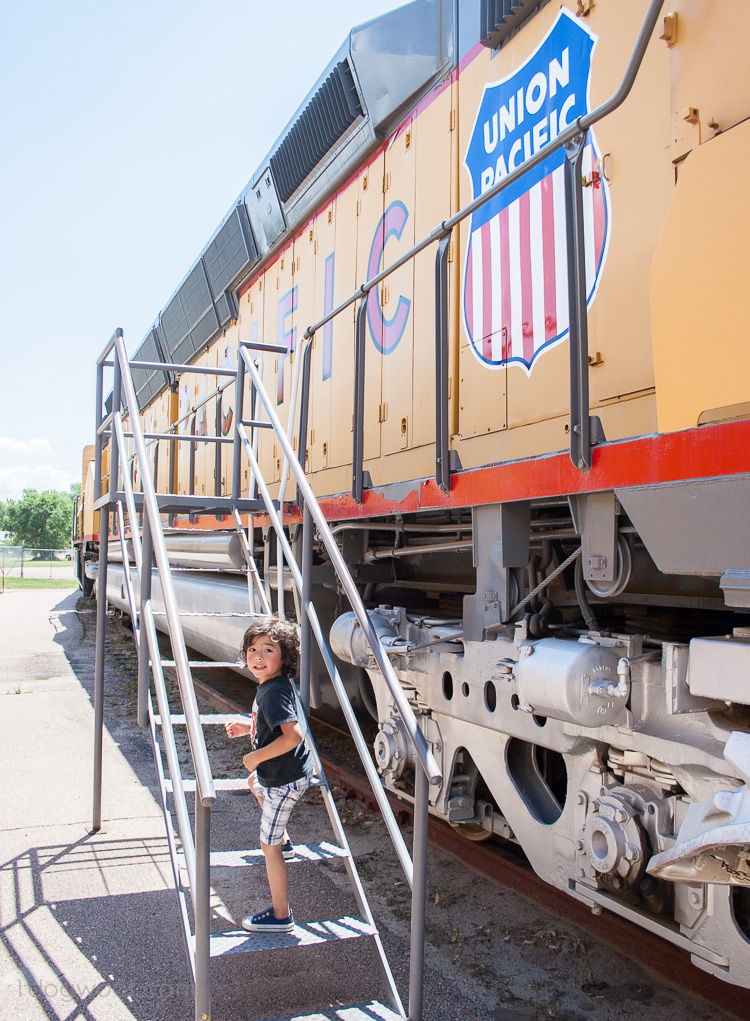 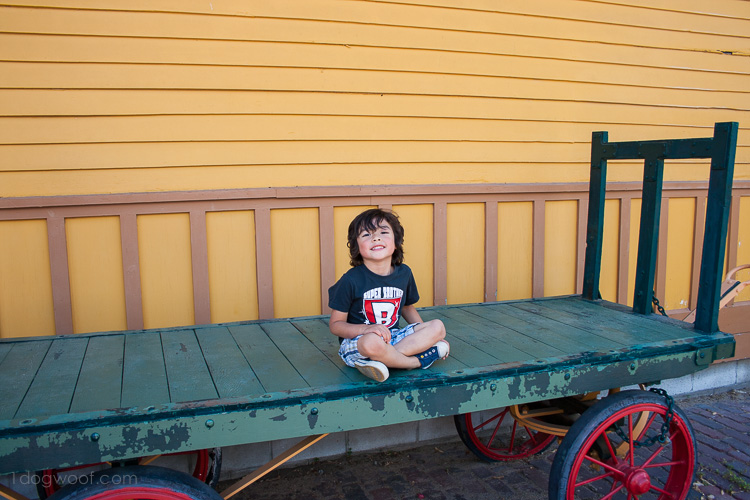 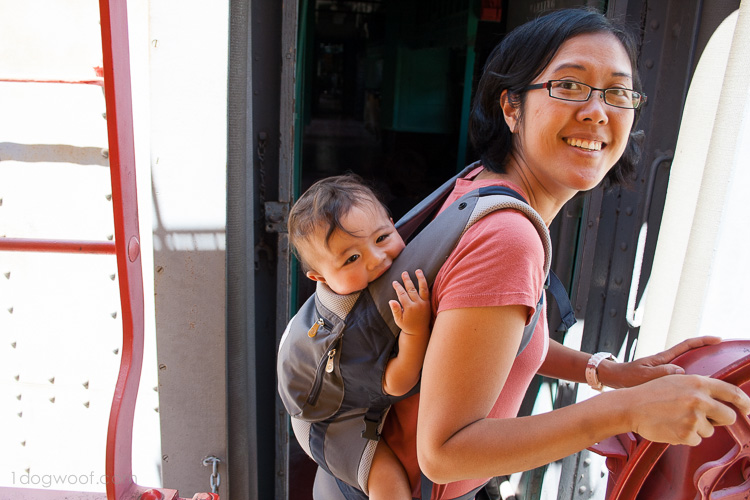 The area isn’t very big – it’s really just the two big engines and a few cars, but stopping there was totally worth the kid excitement.  And crafty vintage-lover mama here quite enjoyed the little bits of nostalgia in the museum, like the old wooden signs and little metal cubby-holes. 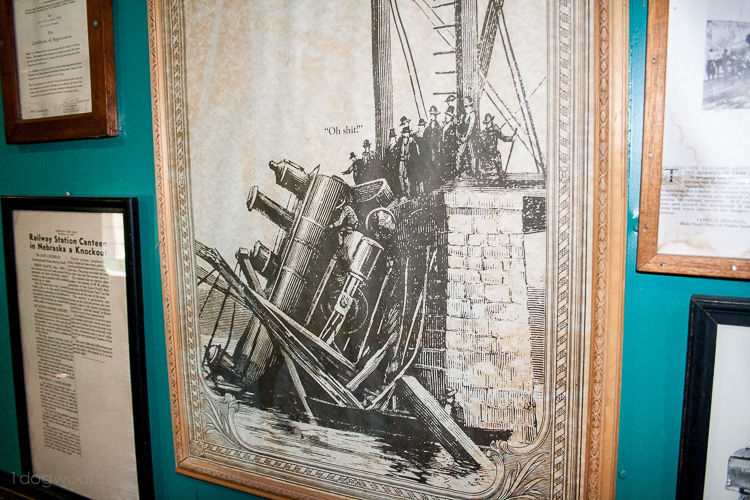 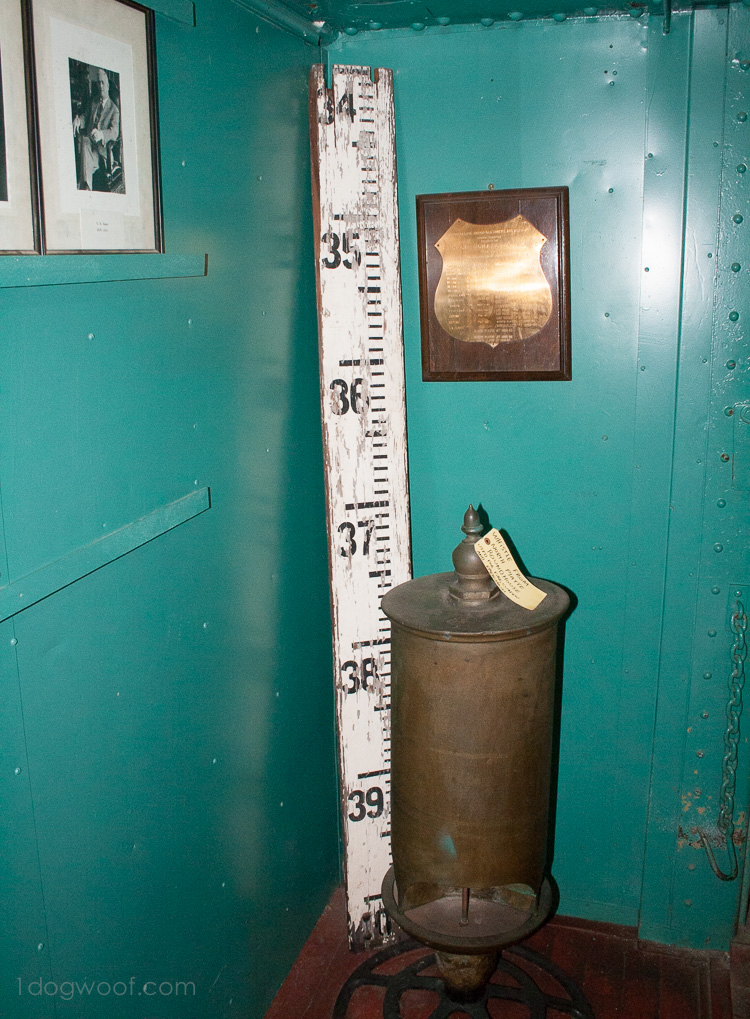 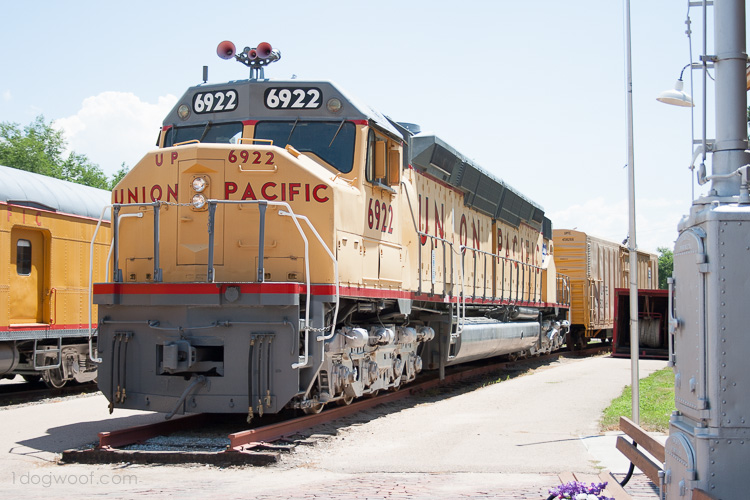 Here’s a fun little espresso place we found on our way out of North Platte.  I liked the little Folgers sign. 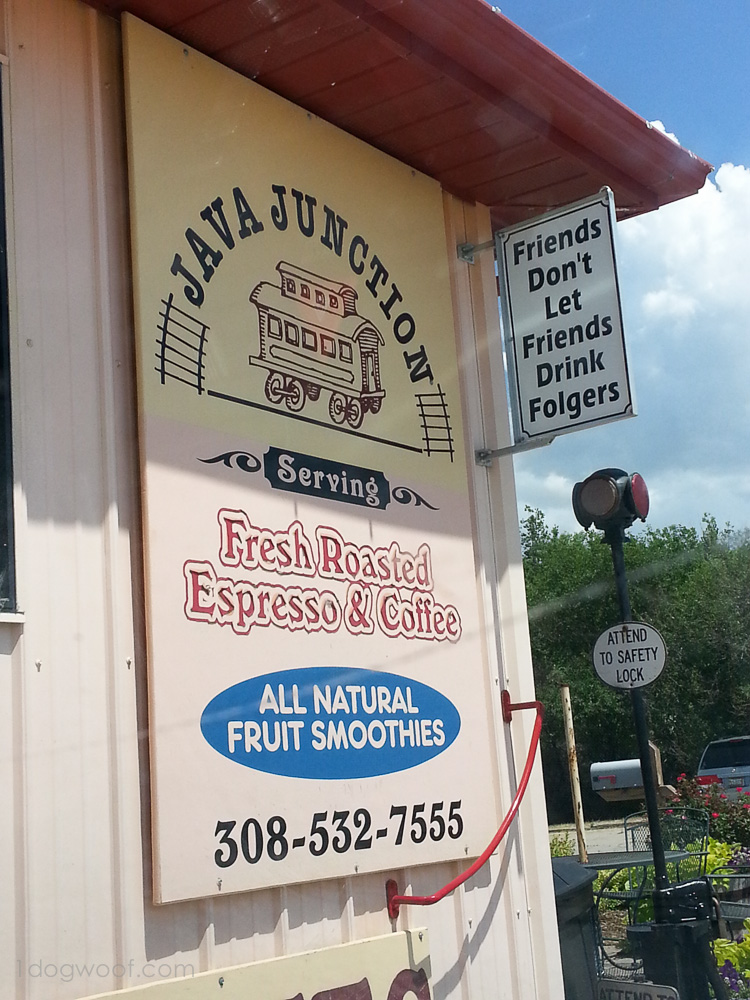 Just Flat and Lots of Sky

Before and after the museum, however, was a lot of flat land.  Before the museum was a lot of flat green land.  Then, after taking a short nap in the afternoon after stopping at the museum for lunch, I woke up to a lot of barren desolate flat land.  Sometimes, I would see a large structure in the distance and think we were coming up on some city, but no, it was another grain elevator.  Another HUGE grain elevator.  These are not the quaint red barn type grain silos you see in the rolling hills of the Hudson Valley.  These are giant concrete structures that one would mistake for a skyscraper.  They looked like a collection of huge hydrogen tanks grouped together – you know, those hydrogen tanks you see in the dollar stores to blow up the mylar balloons?  Now imagine maybe 12 of those tanks stuck together, hundreds of feet high.  I should probably go Wikipedia them and see if they’re still in use!  One thing about this road trip – it’s made me really want to learn more about the life and culture of the areas we passed through! 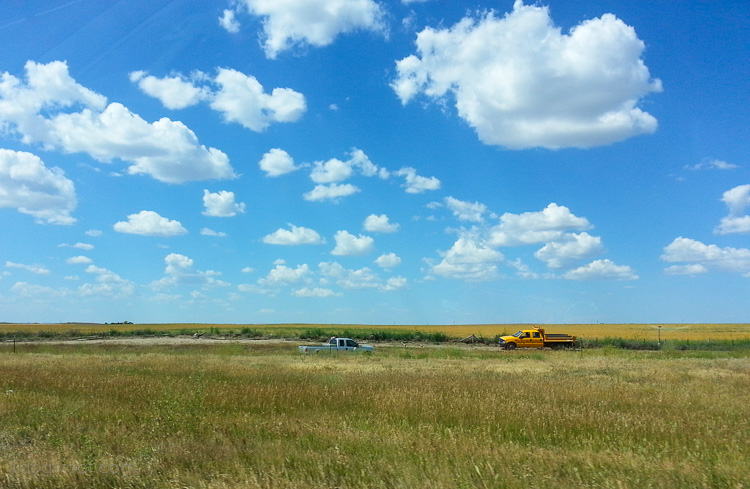 Another interesting sight that kept popping up on the highway were the livestock trucks.  Lots of them.  Some were empty, some had pigs or cows in them.  The one that really creeped me out was the livestock truck filled with baby piglets.  Baby pigs.  Piglets.  Whatever you call them.  They were cute and squiggly and I didn’t want to think about where they were headed.  Being a mom, I was definitely a little shaken at seeing these little animals without their mamas.  Well, ’nuff about that! 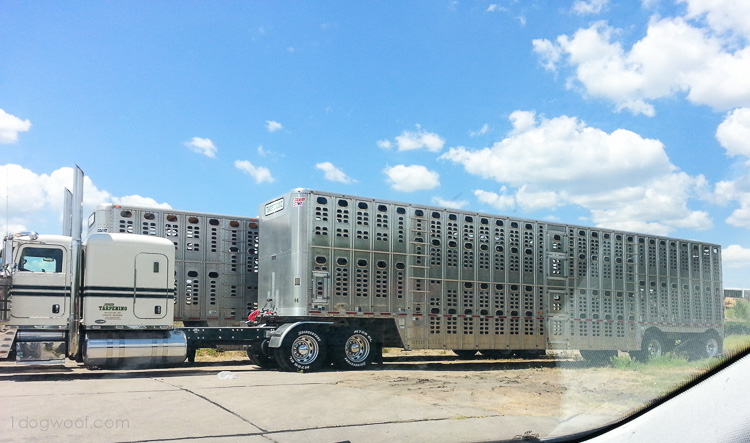 So, I took a nap in the afternoon, and when I woke up, all the trees had disappeared.  It was unnerving!  I realized that I had always lived in places with lush vegetation.  I also think I’m fairly well traveled, having been to Europe and Asia, and several metropolitan areas in the country and Puerto Rico, but they’ve always had trees – Eastern hardwoods, evergreens, tropical jungle trees, those distinctive spire trees in the Tuscan landscape, you get my drift…  But here, there was nothing.  My first thought was “I miss my leafy greens!”

Would you believe it, I didn’t even think to take pictures of the landscape in Wyoming?  I did manage to get bad shot of the state crossing, but I just couldn’t figure out how to capture the vastness (and brown-ness) of the land around me.  “Vast” doesn’t even come close.  You really realize how big a country this is, and I joked with Drew that I could see to Canada from the highway, and that the only thing stopping the arctic wind from blowing my neck was the random caribou…and Yellowstone National Park. 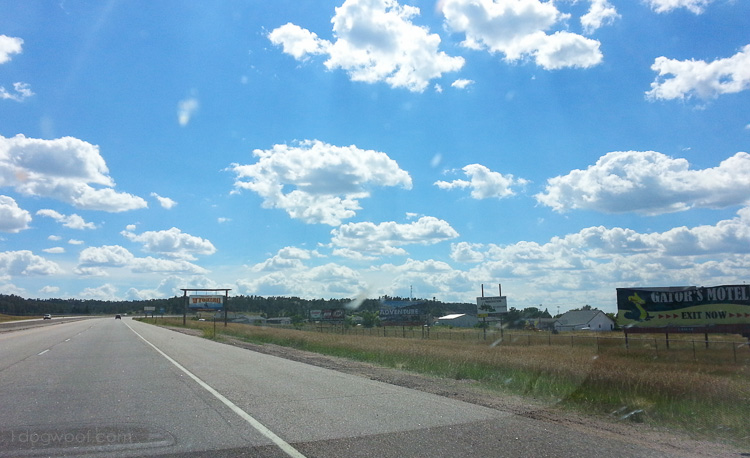 We also lost cell service around the same time, so then I just had this anxiety of not knowing where I’m going except straight down the only road available and hoping nothing breaks down in the middle of this… “barren wasteland”.  That was the nightmare scenario – breaking down in the desert.  No offense to anyone who might live out here; I’m sure there is plenty of beauty to be found, especially a bit further north in the national parks, but all I could think of was “barren”, “desert”, “wasteland”, “how do people live out here?” “where does one get groceries or gas… or socks?”  Ignorant point of view?  Maybe.  But completely in awe of the land.

We stopped for dinner in Cheyenne, which looked awfully cute and “wild west”, and then continued on until sunset (which was beautiful) and stopped for the night in Rawlins, WY.  I had to call a few hotels before I could secure a room for the night – REALLY?  no rooms available in RAWLINS?!  But that woke me up and I immediately called ahead to book our next hotel room.  And so far, our Yakima rack and cargo box are holding up well – no shaking, no whistling, no creaking, even while we cruised at 80 miles an hour.

So, there you go, a lot of driving, not a lot of interest.  A lot of sitting around while your husband drives = a lot of time for contemplating life, at least until the kids wake up and start whining/whimpering/screaming/talking/kicking the back of the seat.  Next stop – Elko, Nevada with a stop at the Bonneville Salt Flats outside of Salt Lake City!

The Home We Left