Wedding Food: What We Ate

I don’t have a whole lot of awesome pictures for this part of my little wedding series, but let me assure you, it was probably one of the more important parts of the wedding, not including the actual getting married part!  I don’t know how many times I’ve said it, but Drew and I love to eat and we love food, and it’s one of the things that brought us together, so it was a priority for us to have good food at the wedding.  I had thought about doing an afternoon cocktail, and then possibly a nice buffet, but for my family, “feeding people” means a real sit-down dinner, with the works.

The food was approximately half our budget.  We had it catered from one of the nicest restaurants in town.

We started with passed hors d’oeuvres during cocktail hour, along with wine and champagne.  I don’t remember all the different plates, but there was a fried meaty-ricey goodness ball, and a tomato soup in little shot glasses, delicately topped with a little basil. 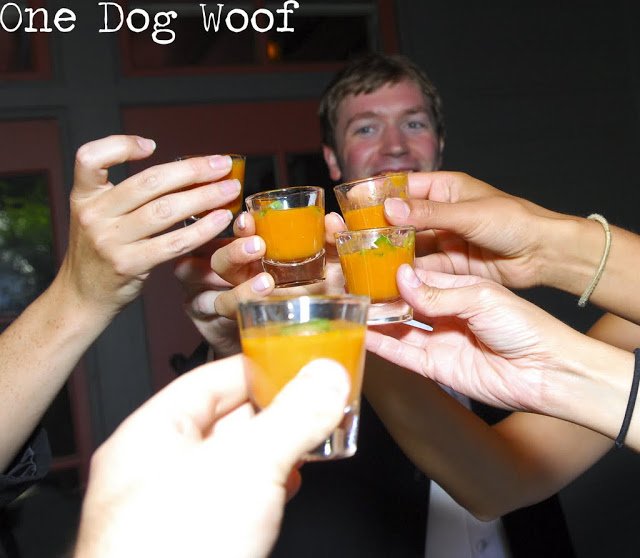 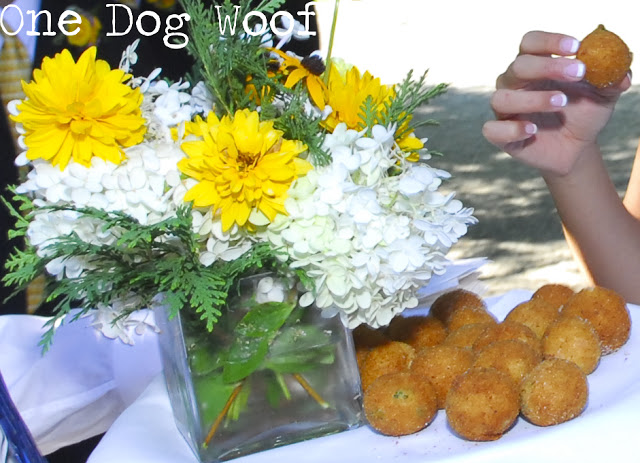 Dinner service started with an heirloom tomato salad, simply dressed with extra virgin olive oil and basil chiffonade.  The tomatoes were grown right in the restaurant’s garden.  There’s nothing quite like a fresh tomato salad at the height of summer, and once you have a taste of ripe heirloom tomatoes, you really can’t go back!  It was hard to find a picture of this course, since most plates were empty! 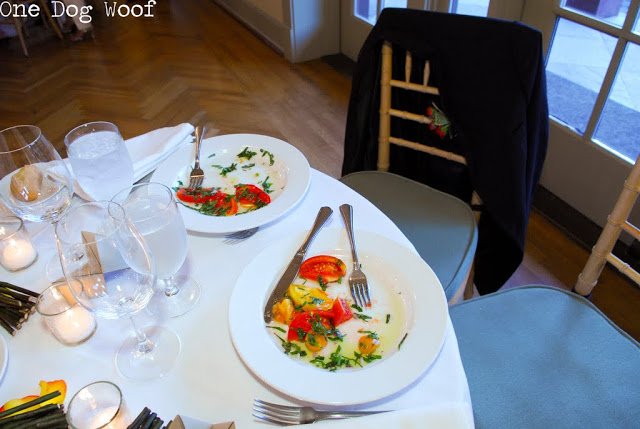 The second course (which I don’t have a picture of), was a pasta with peas and pancetta and truffle oil.  Oy, the truffle oil, the decadence!  The whole hall smelled of truffle oil.  Our caterers even made special batches of the pasta for those who were vegetarian (without the pancetta), and for a friend who is allergic to egg (eggless pasta)!

For the main course, our guests were given a choice of free range chicken breast, or fresh Florida grouper in a cilantro sauce.  We chose not to have a beef option, because our caterers convinced us that a mass beef option would never be as good as individual servings eaten at a restaurant, and we wanted dishes from a restaurant, not a mass-produced kitchen.  It wasn’t realistic to customize the doneness of every person’s steak, so everyone had to suck it up and enjoy the fish and chicken.  Oh, the horror :-). 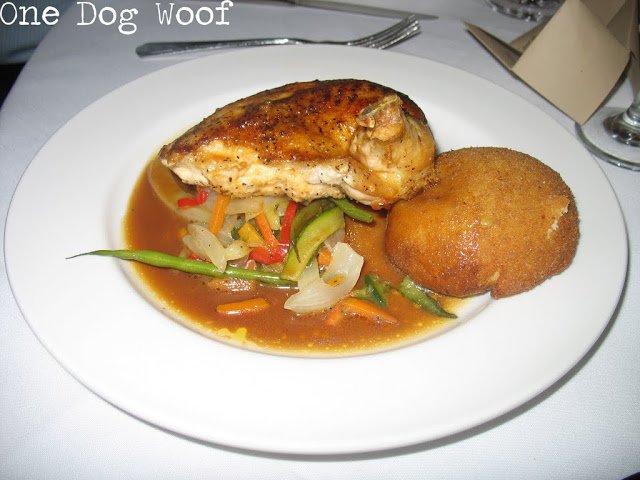 Our caterer offered us a viennese table for dessert.  Again, no pictures, but basically, it was 2 long tables against the wall filled with platters of fruit and imported Italian desserts.  Can you see it in your head?  Think beautiful fruit tarts and Bindi grandmother cakes – a dense pastry filled with cream and lemon, topped with pine nuts, almonds and powdered sugar.  The best part was, we got to take the leftovers home to enjoy on our honeymoon!

Since we had such an awesome dessert option, we chose not to have a wedding cake.  But of course we still wanted to smash cake into each other’s faces, so I requested a cake built out of styrofoam!  I found a local sculptor who was also a grandmother who liked to bake cakes, and she made me a 4 tier cake where the bottom 3 tiers were styrofoam covered in fondant.  The top layer was real, and that’s what we cut during the reception.  Each layer was decorated in cupcakes, and we had matching cupcakes for everyone as their favors! 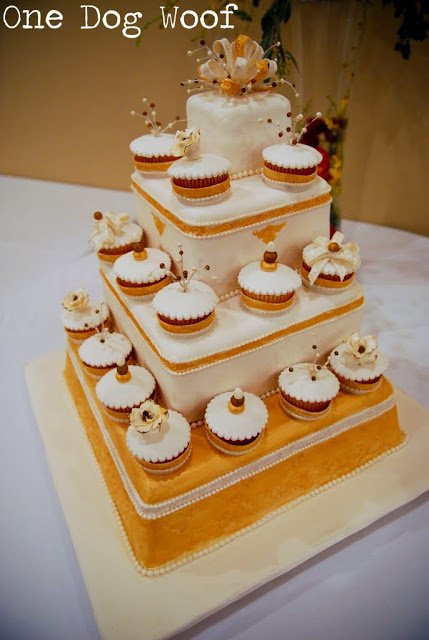 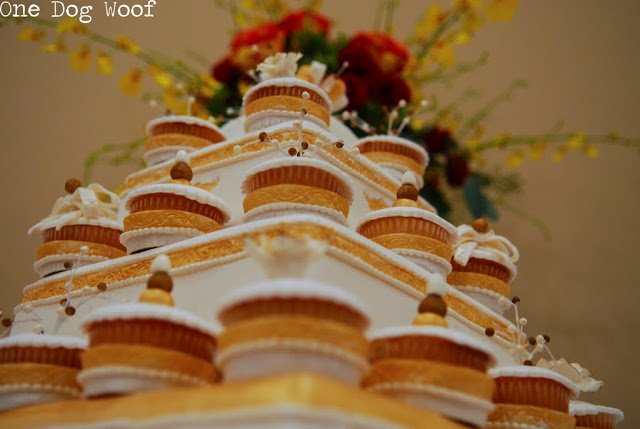 Because we splurged on the food, we decided not to offer an open bar.  Instead, guests had a pretty unlimited supply of Italian wines and proseccos during cocktail hour and then on their table during dinner.  Somewhere, somehow, someone snuck in some liquor in a suit jacket, so when we visited that table, we toasted with a little shot of something.  Cheers!

So, that’s our wedding meal!  I’ve forgotten a lot, but the restaurant is still there, and we go to celebrate all of our special milestones with some awesomely good food!