Meet the frothy sea of squish that is the Snowcone Heart Baby Blanket. Whether you see snowcones in summer or snow fields in winter, this simple knit is made for peaceful and cozy dreams.

This project is created in collaboration with Lion Brand Yarn.

This blanket came out of a desire to both make a friend’s baby a handmade gift, as well as do a bit of stashbusting of my yarn. I love the soft, pastel palette of Lion Brand’s Wool Ease Thick and Quick in Carousel, and I knew it would lend itself to a baby item of some sort, but it took months of staring at the yarn before coming up with the right project for it. To bust your stash means to work with what you have, and having restrictions often ignites the creativity. Looking at my yarn collection, I decided to pair the Carousel with some Lion Brand Baby Soft Boucle for added texture and, to be honest, filler, since I didn’t believe I could finish a full blanket with just 6 balls of the Wool Ease Thick and Quick. For reference, the Daydream Tunisian Blanket uses 8 balls, and the Sunset Stripes Blanket uses almost 11 balls! The result was unexpectedly fun, a little different, and made a beautiful gift for a beautiful little girl.

It’s hard to say which yarn is the star in this project, since they both do different things. The Baby Soft Boucle brings the froth to the party, with tiny balls on a string, like a really really small pompom garland. It’s a more difficult yarn to work with on its own because it’s hard to see the stitches, especially if you work tight stitches for amigurumi, but pairing this textured yarn with something else solves that problem.

I happened to have Wool Ease Thick and Quick Carousel on hand to create this ice cream dream, but I think other colorways in Lion Brand’s extensive Wool Ease Thick and Quick line will work just as well. Having these color options makes this project infinitely suitable for children (and parents!) with all different tastes and styles. Outfit a neutral, modern nursery with the Moonlight or Fossil colorway, or add a pop of color with Spice Market. I especially love how there’s specks of pink in Arctic Ice, which would be a lovely addition in a black and white nursery. Would you stick with Carousel, or choose something else?

A simple stockinette blanket is such a classic, but the Snowcone Blanket has a little extra bit of love in the shape of a modern, slightly lopsided heart. I placed it off-center and towards the top of the blanket, just like how our hearts are placed in our bodies. It’s also hard to see because of the texture of the yarn, but it’s there. Full confession, the fact that the heart is hard to see was not in my original vision, but as I worked through it, I decided to move forward with the design. Sometimes, when I’m stressed in life, or the house is a mess, or when I yell at the kids, my love for my family isn’t as obvious to outsiders, but I know it’s there. So maybe the heart isn’t very clearly visible, but like my love, it’s still there, slightly hidden, slightly off-center, slightly lopsided, and very very real. 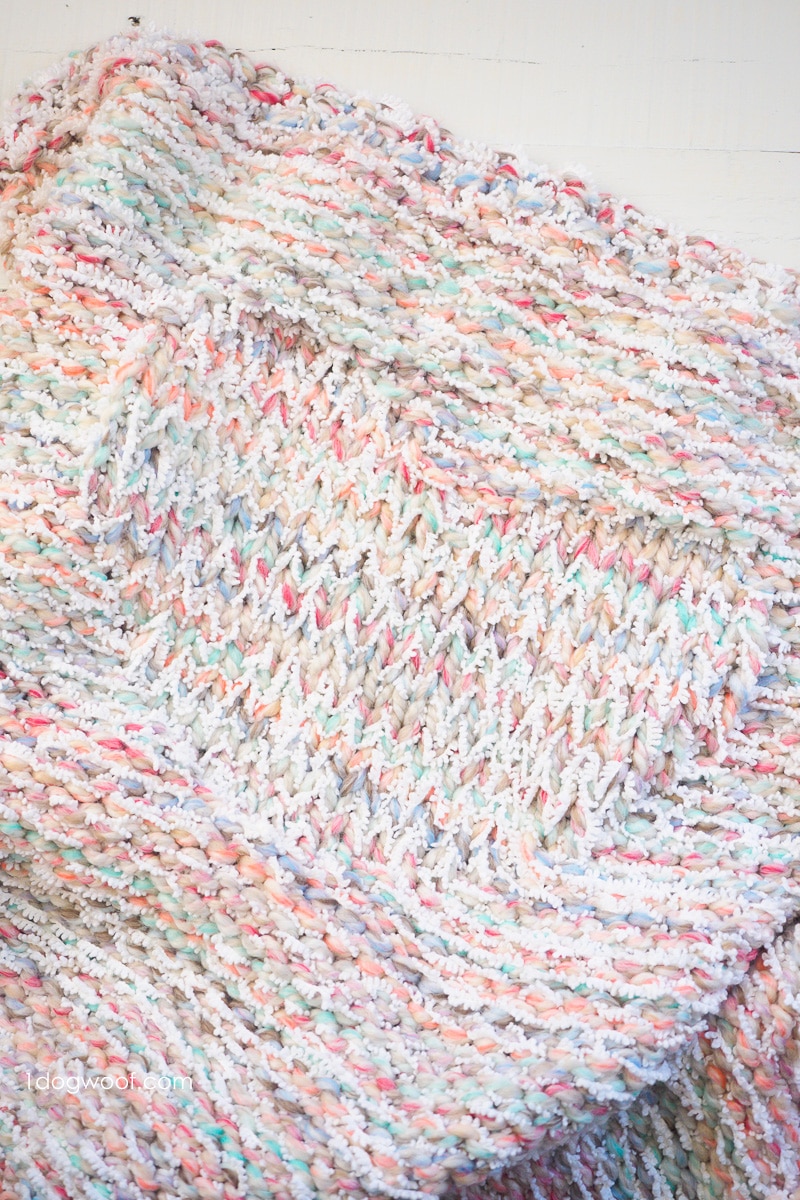 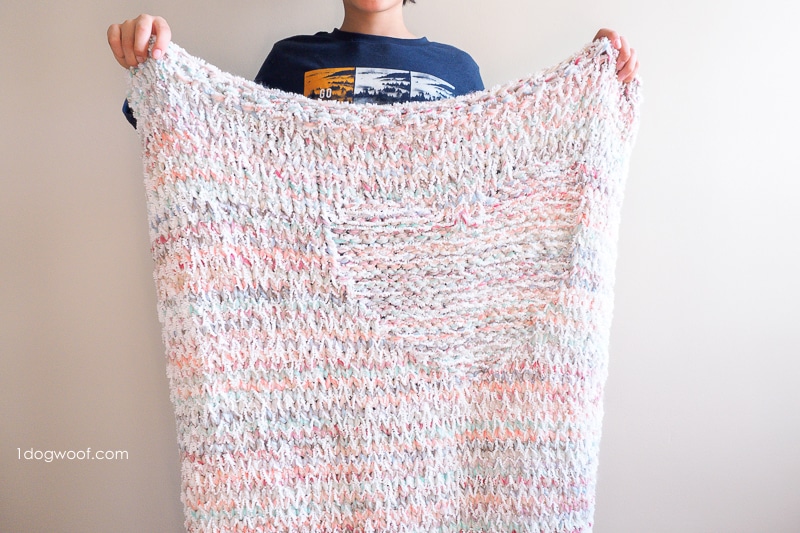 This heart baby blanket is worked from the top down. It starts with 3 rows of seed stitch, and has 3 seed stitches on either side. This provides a border and prevents curling. Once you finish the stitches for the heart, it’s stockinette until the yarn runs out. You can work the blanket to the suggested length of approximately 48 inches, or just keep adding length until the end of either of the yarn balls. Just make sure to leave enough yarn at the end to finish off 3 rows of seed stitch for the bottom border. Alternately, you can use any leftover yarn for pom poms or tassels on the corners. The options are all up to you!

The free written instructions for the Snowcone Heart Baby Blanket is below, as well as a simplified heart graph. The full size graph for the heart motif is available as part of the downloadable and printable PDF, which you can find in my pattern shops on Ravelry and Etsy.Lion Brand also has this project available as a kit on their website – it comes with Wool Ease Thick and Quick in Carousel and Baby Soft Boucle in White, along with a black and white printed copy of the pattern.

If you’d like to venture out and try your own color combinations, just make sure to pick up some Wool Ease Thick and Quick, and a matching color of Baby Soft Boucle, directly from Lion Brand Yarn!

Add the Snowcone Heart Baby Blanket to your Ravelry queue

Purchase the downloadable PDF from Ravelry

Purchase the downloadable PDF from Etsy

Get the Snowcone Blanket Knit Kit from Lion Brand Yarn 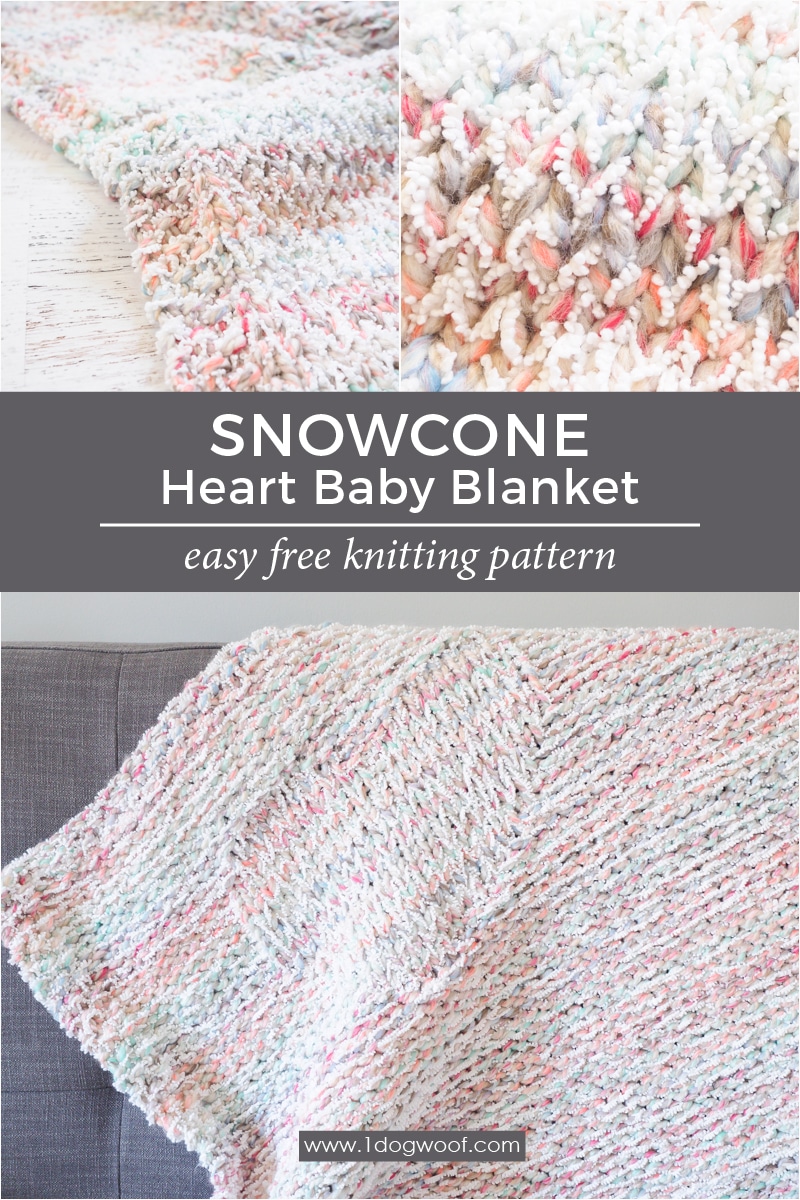 Bind off loosely to maintain stretch.

Weave in all ends. 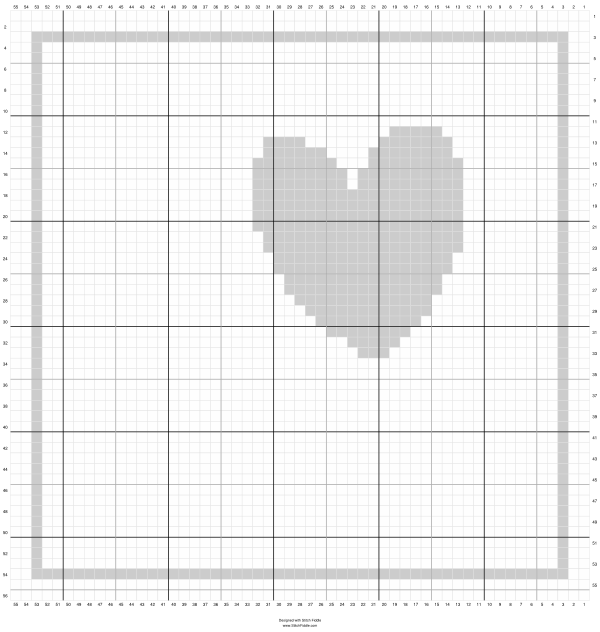