I’m a bit behind on the recapping of our cross country road trip because it is EXHAUSTING to be on the road all day.  I’m not even driving; Drew is doing the bulk of the driving, and I get to wrestle the kids.  Not physically wrestle, I suppose, since they’re strapped into their car seats, but there’s the handing over of drinks, reaching for lost binkies, wiping mouths, singing, and answering the endless questions of a curious pre-schooler on the road.  “Where are we?”  “Are we in Caleeeeforniiiiiaaa?”  “I’m thirsty!”  Here’s a favorite: “It’s booger time…back here!”  Yup, that’s our boy.  So, here’s a recap of our drive from the suburbs of Chicago to Lincoln, NE from 2 days ago.

As you know from the last post, we stayed with Drew’s parents in Chicago in order to rest up.  What I didn’t mention was that we found out J is allergic to mosquitos.  How did we find out?  When his eye swelled shut.  Yup. It was a little swollen in the morning, and I sent Drew off to the pharmacy.  Instead of coming back with Benadryl, he said the pharmacist told him to get ibuprofen to take down the swelling?  Wha?  Well, that didn’t work and by the next morning, his eye was pretty much shut and he was starting to bump into things because of the lack of depth perception.  A friend’s sister was a pediatrician and she recommended Benadryl (finally) so we put him on a strict regimen right away.  My poor baby.  Although, I have to admit, the medicine made him a bit lethargic, so he was a bit more tractable.  Yay?  (Disclaimer: I followed the instructions on the package to treat an allergic reaction.  As the package says, DO NOT give to children to make them sleepy.)

Here’s our Jetta turtle with its Yakima shell, in a suburban environment. 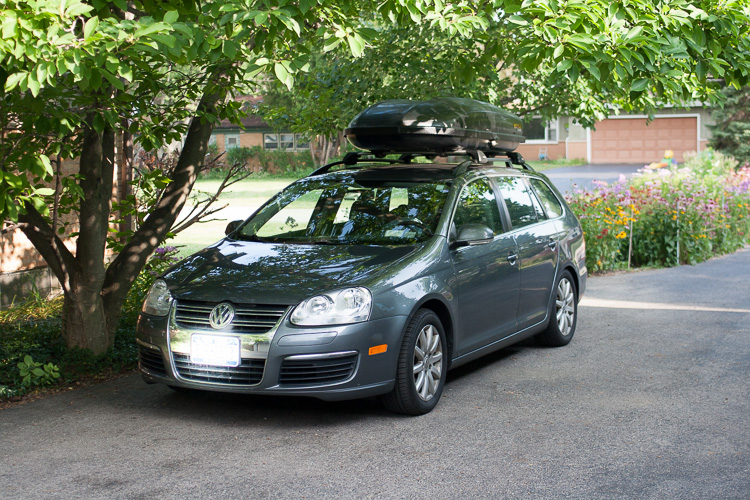 After the many blunders from the first leg of our trip, I finally got a photo of a state crossing, from Illinois to Iowa!

Ok, I’m going to start talking about the landscape here.  Because I’ve been on the road for days now, and the landscape as we drive across the country is absolutely breathtaking.  So I’m just going to babble a bit on the landscape in every one of these posts, on just about every state.  Illinois was flat.  Flat and green.  Lots of corn and maybe soybeans?  The fuel was also biodiesel which may or may not be great for our diesel turtle.  Surprisingly, Iowa was full of rolling hills.  Not Pennsylvania hills, but neither was it the “I can see for miles” type of farmland that I saw in Illinois or Ohio.  Still, lots of green.  And yes, that will change.  Keep your pants on.  I’m getting there. 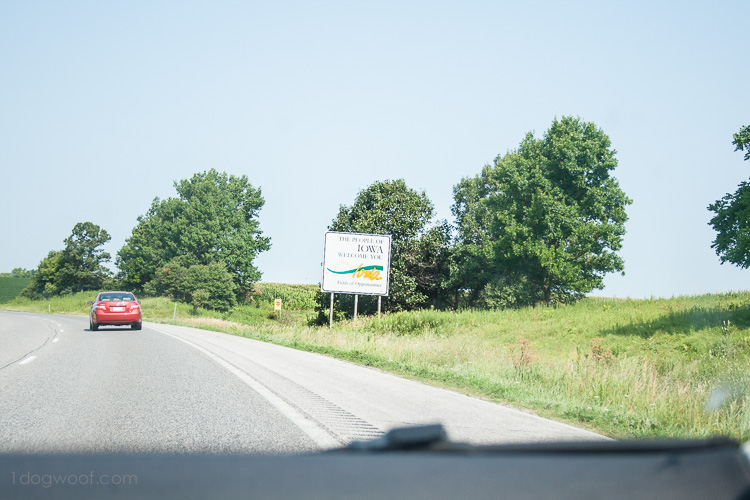 Would you believe we almost MISSED the World’s Largest Truck Stop?!  I told so many people we were going to stop here and we almost missed it.  We were going to continue to the next rest area for diaper changing and fuel, but then I saw the sign and yelped, so Drew swerved right, probably cut off another vehicle and turned off onto the exit.  Swerved….with a roof rack.  We live dangerously. 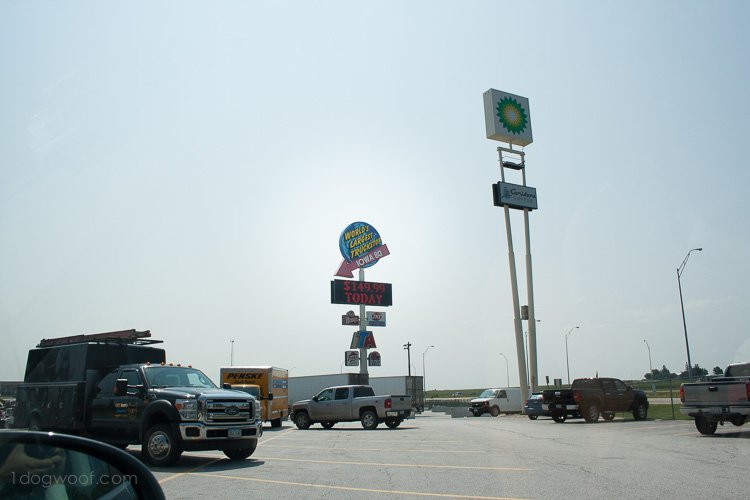 To be honest, this place wasn’t THAT impressive.  But then, I’m not a trucker, so I couldn’t quite appreciate the mega mart of truck supplies that this place had.  If you said this was all crafting supplies on the side of the highway, then I probably would have fainted. 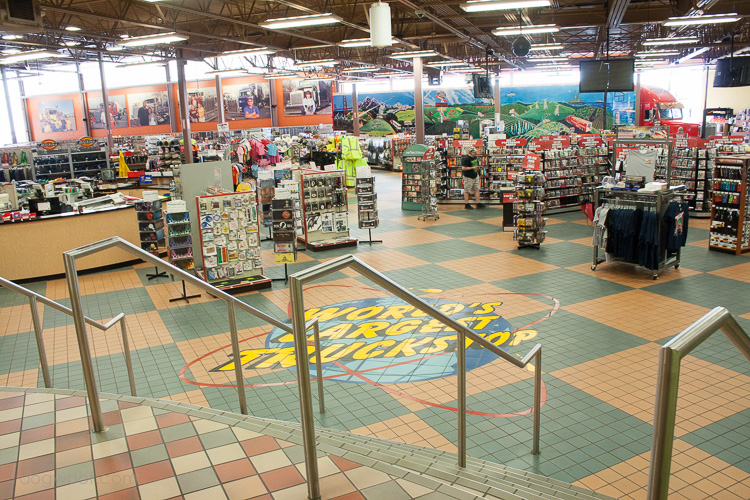 When I first received our Yakima roof rack for review, I told myself I was going to take some artsy photo of it sitting on the top of our car.  Well, this is it.  But here’s the thing – the photo didn’t come out too well, but it’s not the rack’s fault!  Actually, I paid attention to all the different roof racks and cargo boxes we encountered on the road, and I really do think ours is the bomb diggity.  First, the bars are flush so they don’t stick out from the sides of the car (hence the lack of interest in the rack selfie).  The cross bars end right on the side of the car so it keeps the vehicle looking slim and driving slim.  The cargo box is super light with a slim sleek look so it really looks right at home on the top of our car.  On our leg to Lincoln, NE, we were able to get 36.4 mpg on the highway, and that’s with us carrying TONS of weight with a thing on top of our heads!  I don’t think the box even hurt our mpg that much, since the weight of all our goods was going to lower our efficiency anyways. 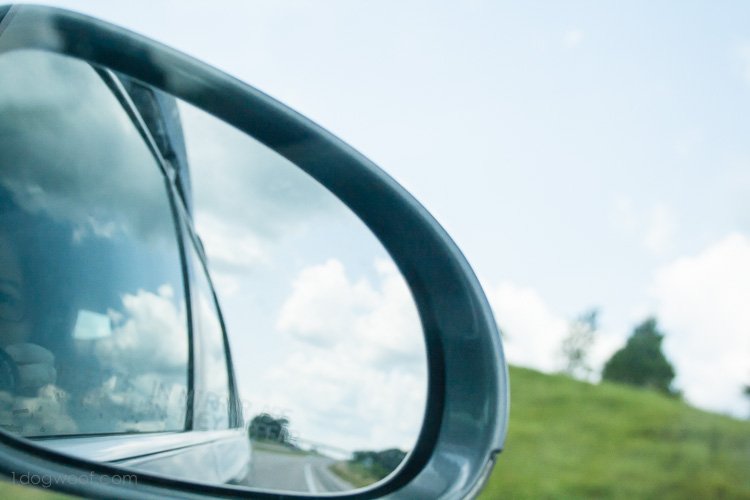 Here’s some farmland.  I’ll be using this as comparison to the barren desert wasteland we saw as we drove West. 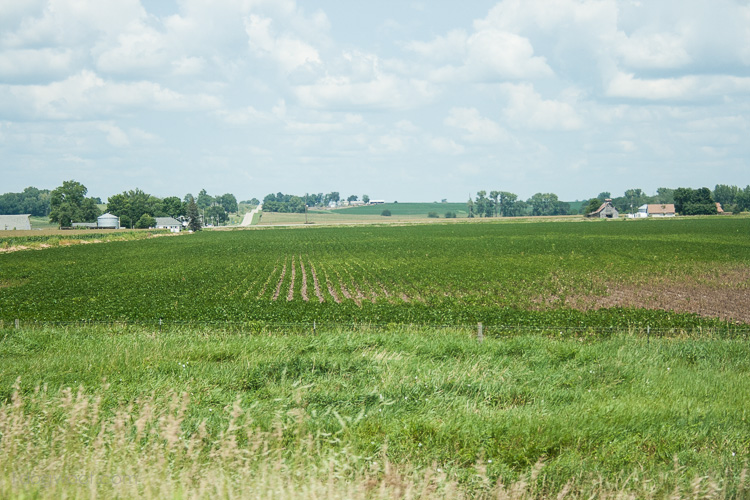 I had this plan of stopping to see all the different funky American roadside attractions on this trip, but in the end, it boiled down to one big stop each day.  Although, fine, this leg had two big stops if you count the World’s Largest Truck Stop as a “big stop”.  In Iowa, we stopped at Living History Farms, in Des Moines.  It’s a huge complex with different areas for different eras in Iowa history, with a 1700 farm, a 1900 farm, and an 1875 village.  We got there too late to check out everything, so we wandered around the 1875 village for a bit.  J chased some chickens. 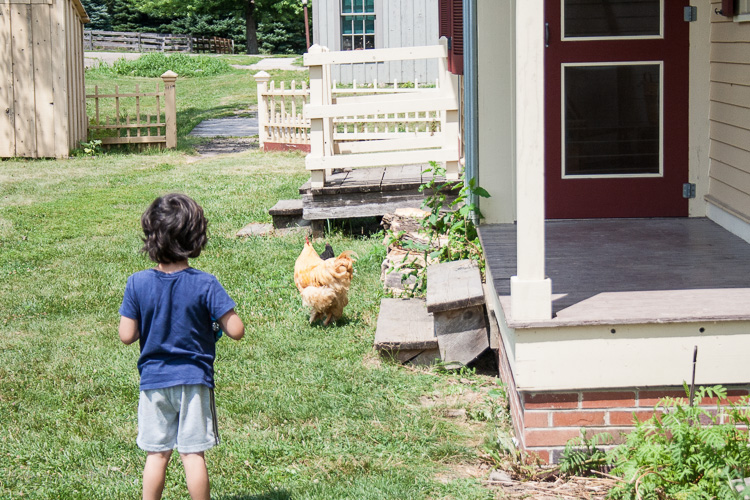 The crowning glory of this village was this owner’s mansion.  Honestly, my brain is fried and I can’t remember the guy’s name, but he built the original farm on this property and this was his house, and he was rich.  Which is really all you need to know.  The house was beautiful, inside and out.  You can tour the rooms and see how a rich person lived in those days, as compared to the less affluent businessman, who lived in the house with the chickens. 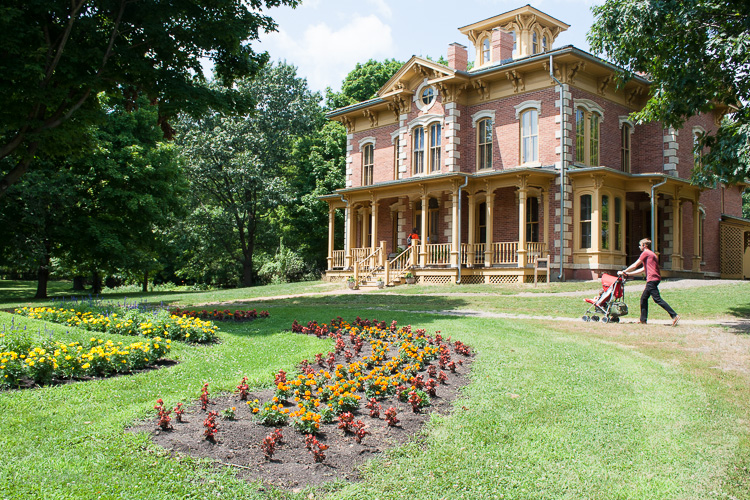 I wasn’t really going to include this photo because I think I might have nightmares about it someday.  It’s a girl’s room in the mansion and it’s beautiful, except I keep thinking that it looks like it could be used in some creepy historic horror movie or something.  And yes, now you have that thought burned into your brain.  You’re welcome. 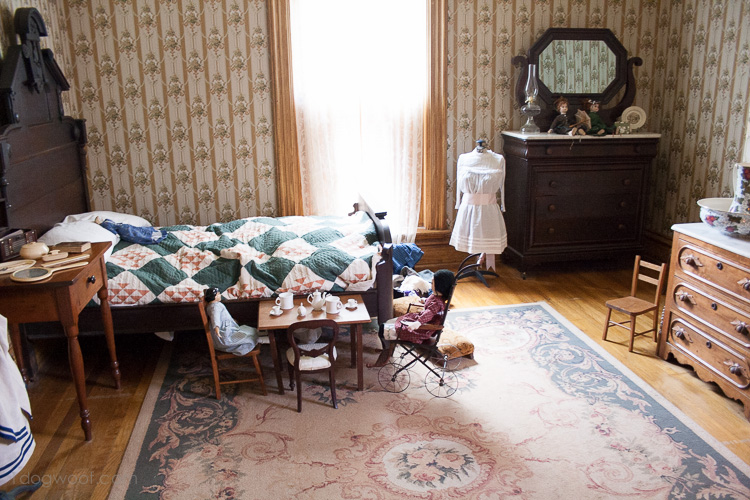 On our way out of LHF, I decided to make a last minute stop at the village press.  And oh boy oh boy was I glad I did!  It is seriously a typographer nut’s heaven on earth!  I just finished a typography class last semester and am in the final throes of a History of Graphic Design course where we learned about the history of printing and type setting, etc, so this was seeing my education come to life! 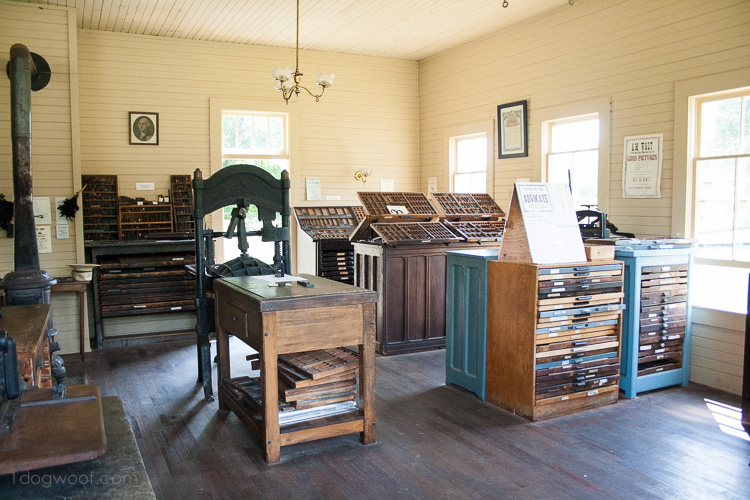 I want a room in my house to be ALL THE PRINTING PRESS THINGS.  Look, it’s Bodoni!  We still use that font today!  And it’s real honest-to-God metal type.  And the two “villagers” there actually picked out individual letters, set them on real printing presses, and printed sheets out.  I took one home for my Smash book, heck yeah. 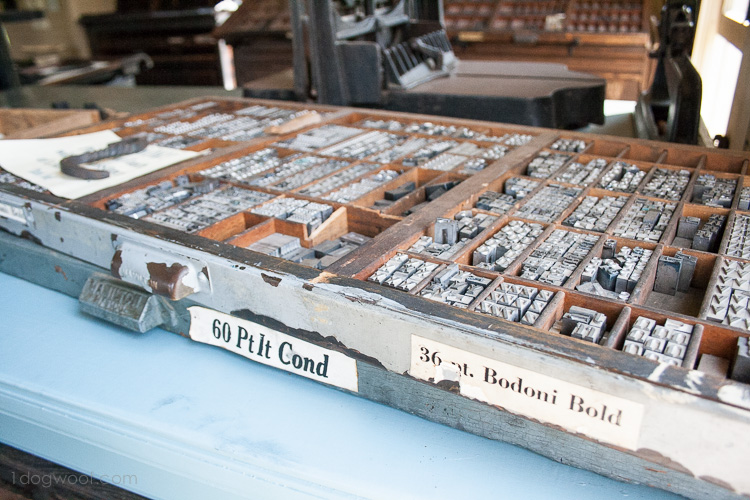 More metal type.  Please excuse me as I wipe the drool off my face…. 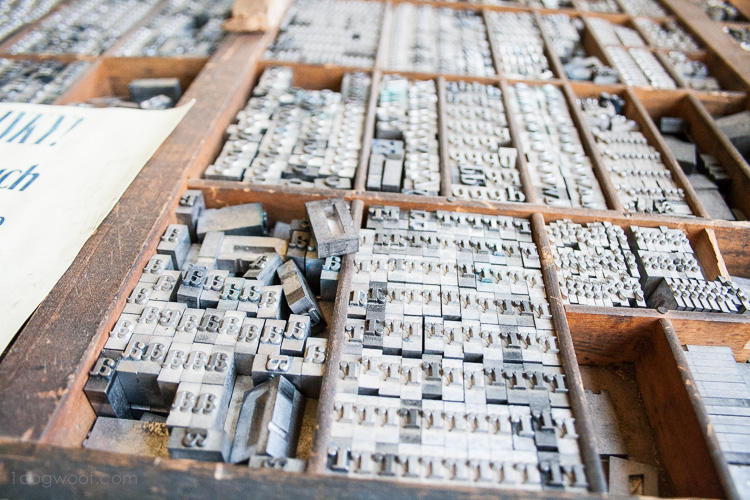 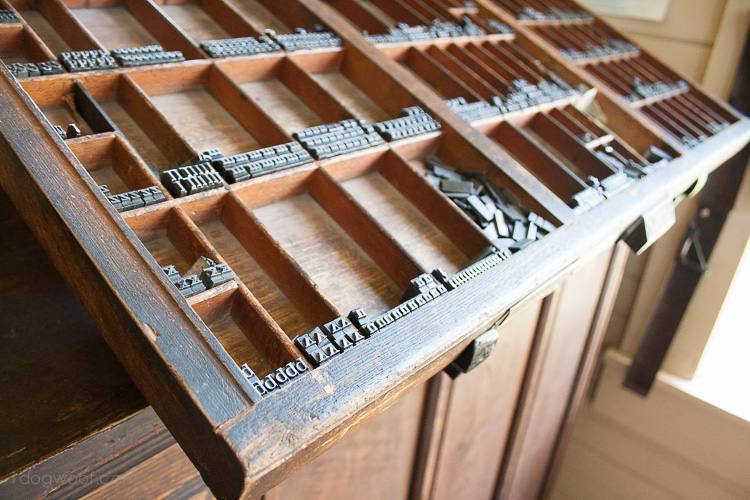 And look! It’s leading!  Leading is the space between lines of type, so your b’s, p’s and q’s don’t get all garbled up in each other’s way.  They’re called “leading” because they are actually thin strips of lead.  Just so you can see this in your head, I was pretty much jumping around like a kid at Disney while Drew looked at me like I was a crazy person.  He kept saying something about Helvetica, at which point I snootily pointed out that Helvetica was not yet invented, thank you very much. 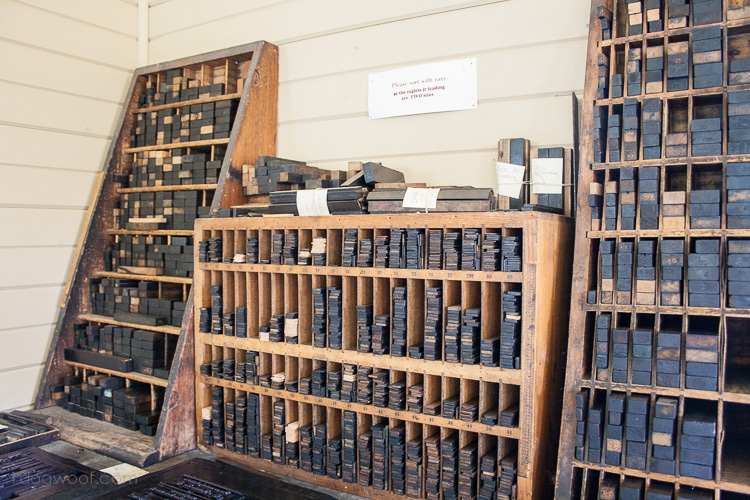 Well, that little detour pretty much made my day.  I don’t remember if the kids napped or chattered all the way to Lincoln.  We stopped at a hotel and were actually told that they were out of rooms.  Seriously?!  On a weekday.  I guess I-80 makes for a lot of business!

Next up, Lincoln to Rawlins, WY.  Go ahead and look that up on a map; I had to.

Here are the other posts in this whole “Relocating Across the Country” series:

← A Different Type of Home Tour... The Great Plains - Our Cross-Country Road Trip →