My Craft Room: The Journey

If you’re new here, the full craft room reveal can be found here!

This post, and the next one, has been SOOOO long in the making, and I’m so excited to finally put fingers to keyboard and show you the AWESOME craft room my handy dandy husband and I built.  Ok, so it was mostly my husband, but I helped!  For real.

So, this post will be the before shots, the mess we started with, the anxiety of remodeling, the stress of decorating, and peeks at the wonderfulness of the finished result.  My next post will be the full tour.  Okie dokies? 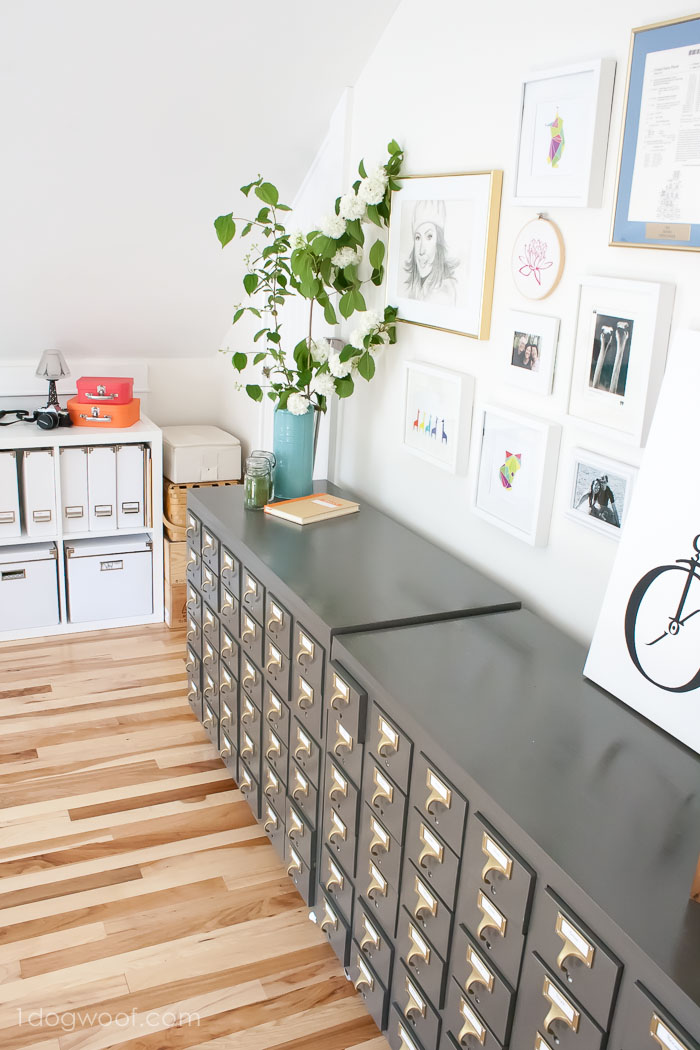 When we first viewed the house, I really liked the idea of having two rooms in the attic – oh the potential!  a room of my own!  a sanctuary!  It’s pretty amazing what you think looks good during a house viewing because once we were married and moved in and I finally started contemplating the idea of a craft room in the attic space, all I could think of was…ugh.  I mean, yes, it was a great space, and still had great potential, but ugh.  The blue carpet, ugh.  The blue and green walls, ugh.  The cream trim…with the blue blue blue…super ugh.  But, there was much to be done in the house, and the attic space worked for the time being. 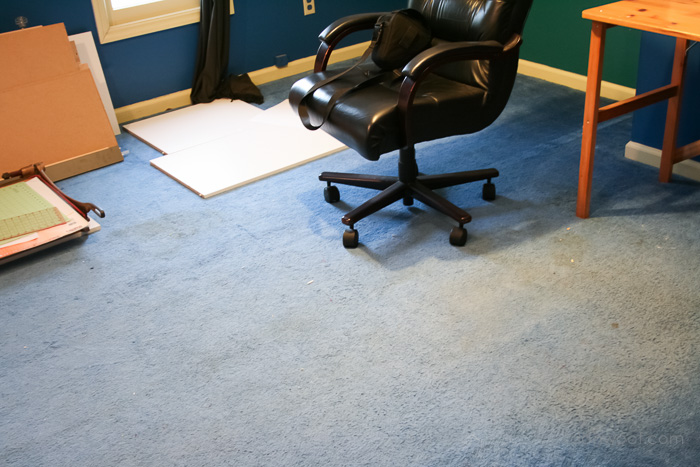 As my little blog endeavor grew, I became more and more anxious to really have a space to do work and to store my ever-growing supply of STUFF.  And the more time I spent in la room blue, the more blah I got. 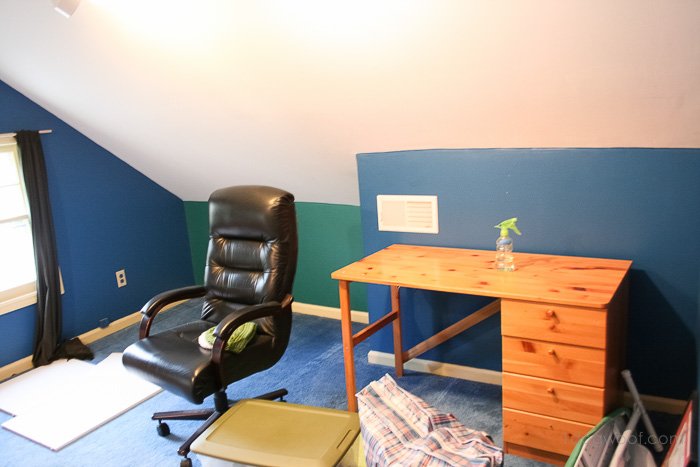 Drew ripped up the carpet and we put down super scratch-resistant hickory wood floors, you know, in case I drop scissors and other sharp implements.  Then there was the painting of the walls, the trim, the windows, the quarter round, the baseboard, and the shelves.  A few lights, a desk hack, and a card catalog later, I thought I had it going on.  I mean, it looks TONS better already, doesn’t it?  Just look at those floors! 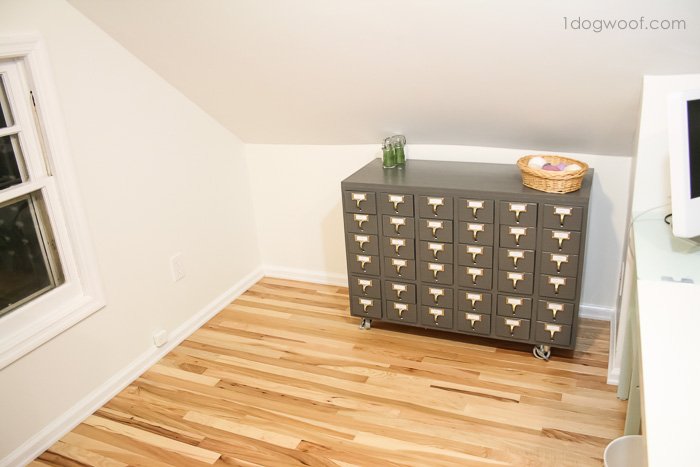 But as time went by, I realized I was still dragging stuff down to the dining table to work on because the dining room got such better light during the day, while the attic room only got light at 8am or so which was a very slanted weak morning light, not the robust afternoon light I wanted for shooting photos.  And with me running on very little sleep, 8am was just not an optimal time for crafting, you know?  So all this work and a new craft desk, and I was still making a mess in the dining room. 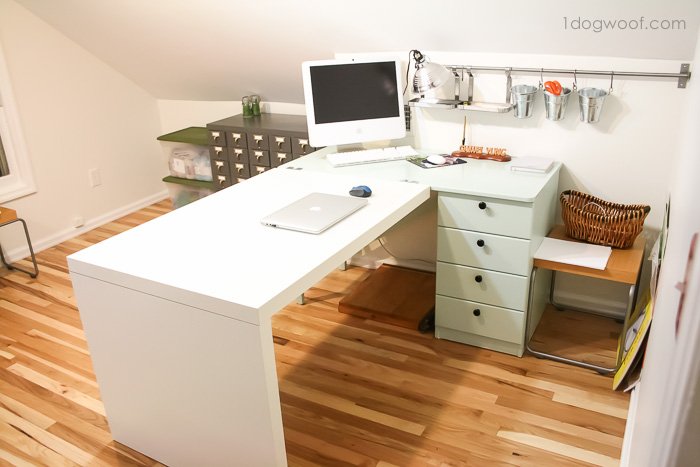 Work in Progress, Round 2

Drew, trooper that he is, tackled the second attic room on his own, with help from his dad, some spray foam insulator guys and contractors who put in the dry wall.  Let me just say, if you thought the blue room was bad, this second room was worse.  It was DISGUSTING.  Bare studs would have been nice (mind out of the gutter please!).  But no, this room had dead bees in the windowsill, a weird papery wall, wide pine board planks that were not nearly as romantic as it sounded, and holes cut out to access the knee walls that were covered by cheap dirty muslin held up by thin little tension rods.  I cringed every time I had to duck in here, afraid that something dark and creepy crawly was going to get me.  Oh yeah, and I mean “duck” because the door is 5 feet high at its highest point.  This was the turd room of the house.

Sorry no photos of the second room.  I just never thought to take a photo of such a turd room and by the time the remodeling started, I was sleepless in seattle over here with the pregnancy and avoiding the dust and fumes, so apologies, no super dramatic before-photo.

My builder husband slowly ripped the room down to nothing but the original studs of the house, and rebuilt it all from scratch.  Framing, wood flooring, dry walling, painting, he even rebuilt all the window sills himself.  The room was white and clean and new, and was going to be his new office … … until I realized this room got GORGEOUS light in the afternoons for a few hours, and decent light the rest of the time.  So I wheedled my way into making it MY new craft room instead. 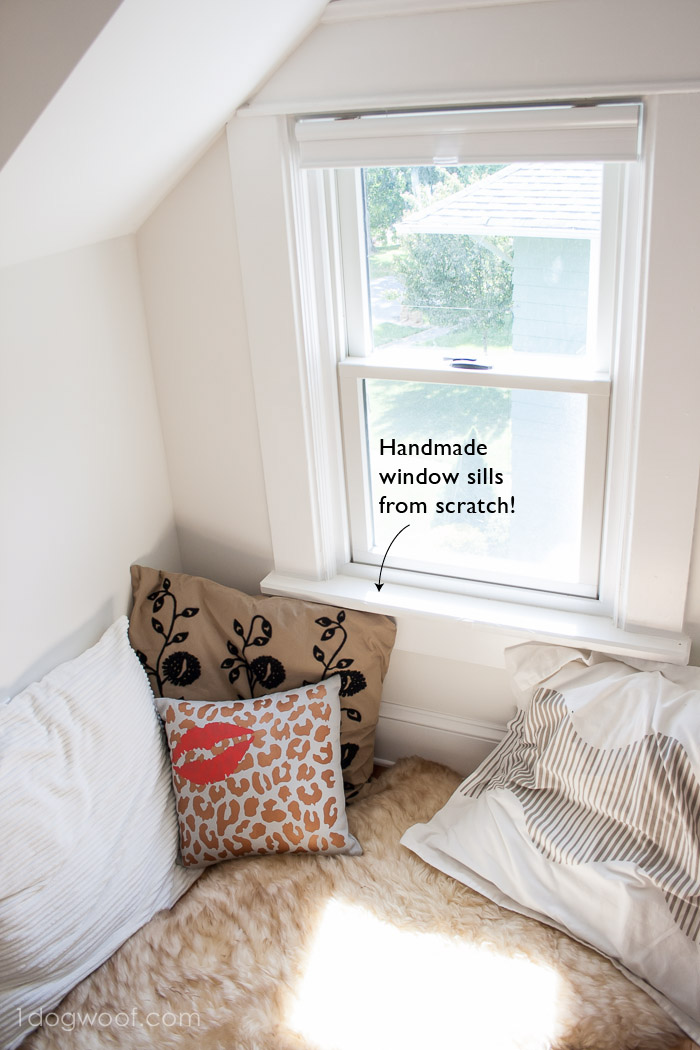 After moving my stuff in, I hit another round of UGH.  I was so close to finishing my craft room and then I was just stuck. Everything was in place. Most everything was organized, but I just couldn’t make it look …good. I know I was also hormonal around that time, but I was so indecisive and so uncertain about what I wanted the room to look like. I asked around and several bloggers gave great advice on decorating, and while I tried some of their suggestions, nothing really resonated with me. 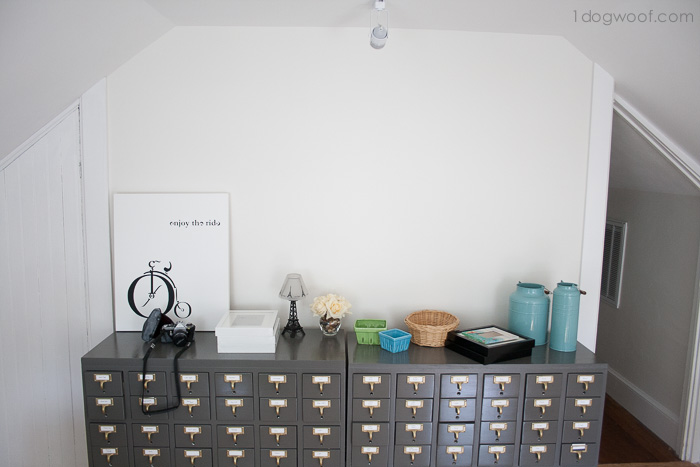 In the end, all I could say to myself was “what you love”.

Don’t try to impress.  Yes, I want it to look like it was a Better Homes and Gardens feature, but there’s really no need for it. If you just do what you love, and display what you love, then it will be just right for you.  I had to keep telling myself that because I was just so frustrated and tempted by perfection, but also overwhelmed by the sheer volume and randomness of my stuff. 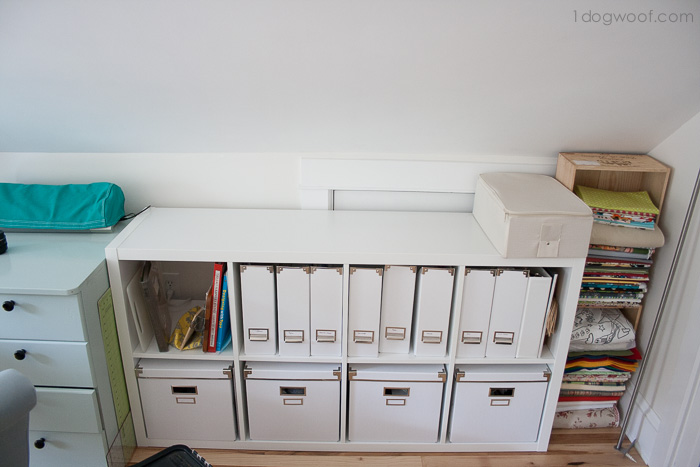 This room was just supposed to be a craft room. But it has turned into this thing where I think about where I’ve been and where I am and where I’m going.  I finally got around to updating my Linkedin profile, and had a really nice talk with my mom about my plans for the future.  She’s ok with me starting a new career, going back to school, changing paths, which is such a relief.  I don’t have to be an engineer anymore.  Looking at this craft room, I have to figure out who I am now, who I want to be, and what makes me happy.  What is my favorite color and what is my style?  I never really thought about it before.  I mean, yes, I have, but not REALLY.  If I decorate with what I love, then this space becomes me.  And maybe it’s like that saying – dress for the job you want.  Maybe this craft room is saying – decorate for the future you want.  Yes?  No?

I thought I wanted a color themed office – I had even decided on aqua and coral. But you know what?  I’m an indecisive girl, and I love color, plain and simple.  So screw it all, I will have as much color as I want in this room … against a backdrop of white.  Because almost every single inspirational photo that I am drawn to is of a clean white room with pops of color – little bits of joy, memories, things that make you smile, a story, a joke, a tear.  My life is filled with stuff – baby toys, kitchen gadgets, clutter everywhere.  I want MY space to be as clean as possible.  Filled … no not filled … curated with the things I love, things that have meaning to me.  Everything else can go in a box.  Minimal but well-curated.  A pop of color, white expanse.  No need to fill a space for the sake of filling a space.

This might mean I need more boxes.  And a closet.  Good thing there’s a nice cedar closet behind closed doors…

So that’s what I did.  I gathered my memories and all those personal tidbits and put them on display.  See the full reveal here!

All in all, building up this attic has been quite a journey.  And I say it’s a journey because it wasn’t just a decision made and followed through – it really was an exploration of what fit our needs, what we could accomplish in our busy schedules, and what I could get out of my husband with a little sweet talking and batting of my stubby eyelashes.