This is a Sponsored post written by me on behalf of Krazy Glue. All opinions are 100% mine. 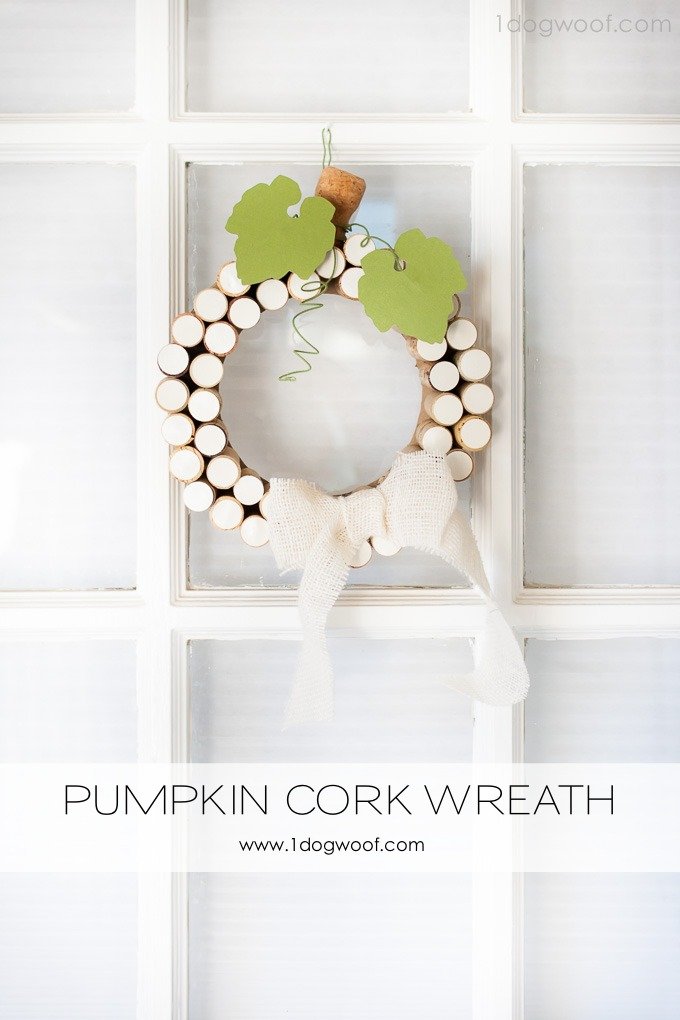 There once was a blogger (that’s me) who knew a restaurant manager and asked him for some wine corks. Considering how many bottles the place goes through in an evening, it wasn’t long before I had two bags worth of corks. Unfortunately, one of them got thrown out during the move. What can you say, we were downsizing, and I hadn’t touched those corks in months and months. I wanted to keep them, but was given the stare-down-evil-eye by my “so-tired-of-my-craft-stuff” husband. Besides, Napa and Sonoma are right here, I can drink my way to more corks, right? (Not really.) So I had this bag of corks and no idea how to use it, until now with my white pumpkin cork wreath, because I’m rolling right along with the Halloween and Fall crafts right now. 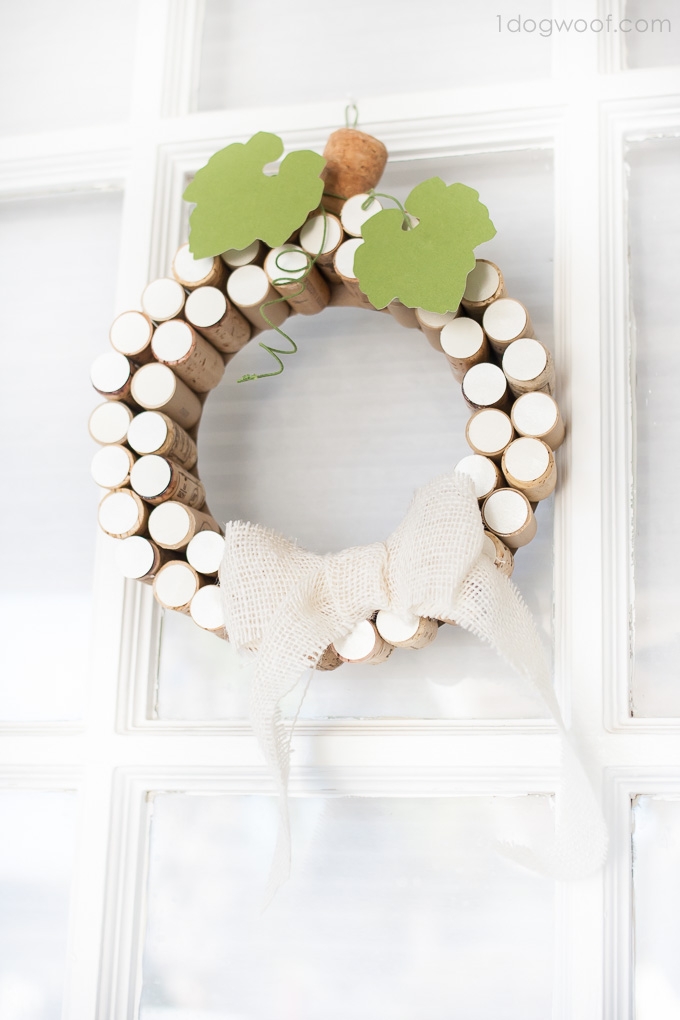 There’s my cork pumpkin making friends with the other baby pumpkins I’m collecting. 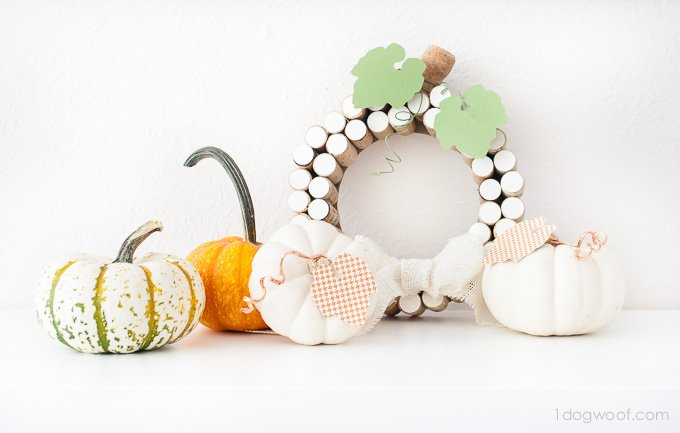 For this project I used supplies I had around the house, and got the chance to work with Krazy Glue’s Krazy strong, Krazy fast new Craft Glue line. 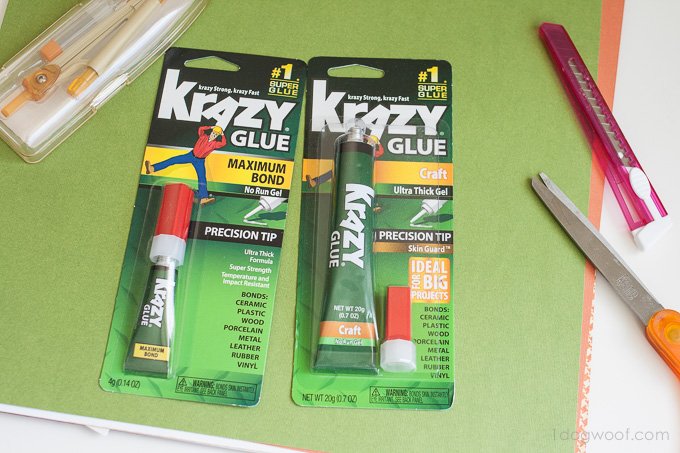 1. Start off with a wreath form. I cut two forms out of old cardboard that were about the strength of cereal boxes and glued them together. The forms are 8 inches in diameter and the inner ring is 5.5 inches in diameter. 2. Glue on the corks with Krazy Glue! I’ve tried cork projects before and had used a glue gun to attach corks to each other or to a form, but I could never get it to stick. Maybe I’m just not very good with a glue gun, but I’d get globs everywhere, strings of hot glue all over my hands and the project and then the corks just popped right off. It was maddening. Don’t mess with a craft blogger in the middle of a craft fail, you know?

But with the Krazy Glue Craft glue, things worked out way better. Waaay better. Like, I did this whole thing during LM’s nap, better. The glue is gel-like, not runny, so you can see exactly where you apply it and you can feel it bond when you press the cork into the cardboard. I constructed the wreath with the corks standing up on their flat end, so I was able to let the glue set while they just kinda stood there. It does take a few minutes for the glue to really adhere, but that’s also good when you get it on your fingers. I felt something tacky on my fingers once and was able to clean it off before I lost skin (and thanks to Krazy Glue’s Skin Guard formula). Oh yeah, and I used both synthetic and real corks, and the glue worked great on both. 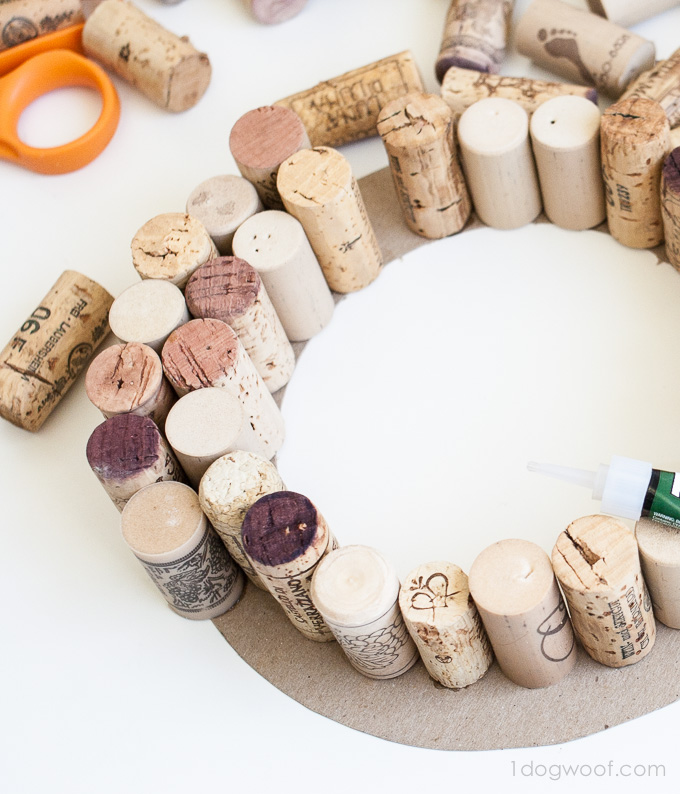 The applicator on my tube of Krazy Glue was small enough to use on the corks, and even to squeeze a few drops in between corks to glue them to each other. The gel formula didn’t drip when I put the tube down, and I didn’t have glue strings all over my cork project. Once all my corks were glued on to the cardboard, I let it sit while I took a break. And I didn’t have to worry about a neglected glue gun setting the house on fire. 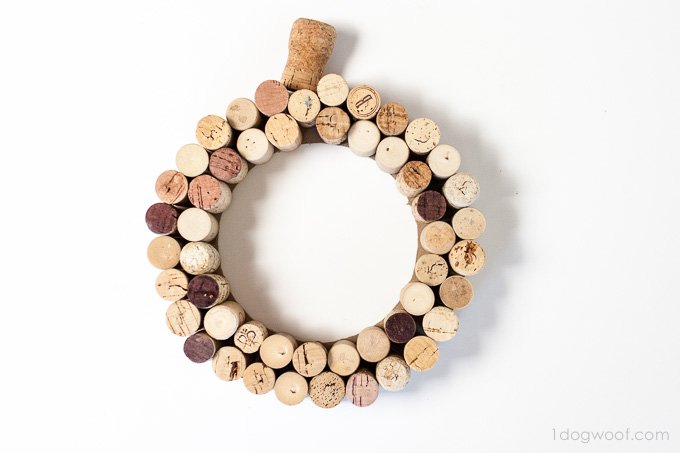 3. Now you get to decorate your pumpkin! I wanted a white one, so I punched out circles with a 3/4″ inch circle punch out of cream cardstock. I don’t know if you can tell, but the cardstock was shimmery, just for a little added fun. I used Krazy Glue Craft glue to stick the circles onto the cork ends.  The super gel-ness of the Krazy Glue was able to fill in the gaps on the cork’s uneven surface and nailed that paper circle down. 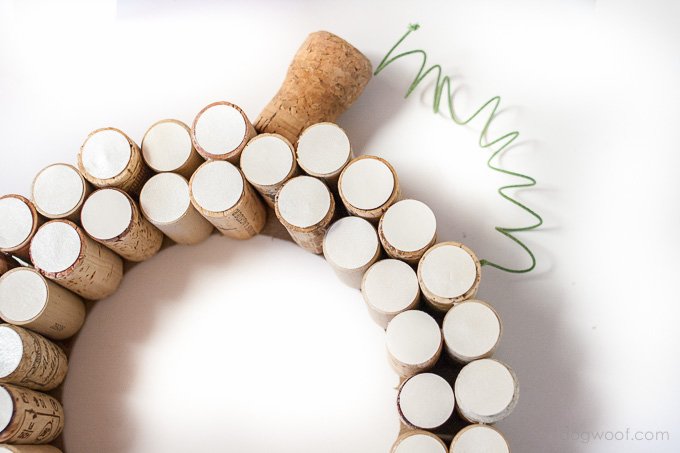 4. Cut out some pumpkin leaves and wind some floral wire around the top. I traced a pumpkin leaf I found online and cut two out with my Silhouette Cameo (cutting through my mat in the process, doh!). The leaves were taped to some floral wire, which I curled around some chopsticks and then were Krazy Glue’d onto the pumpkin. 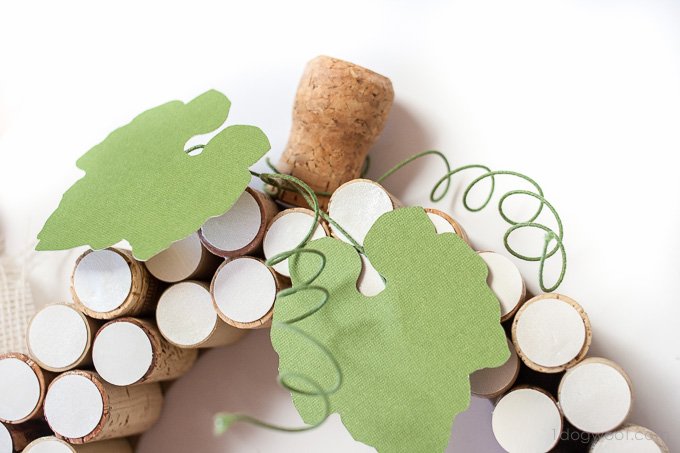 5. Cut out some ribbon or burlap, make a bow, and glue it to the pumpkin to finish off the wreath.  Again, I used the Craft glue so that the gel can fill in the gaps between the burlap and the cork. 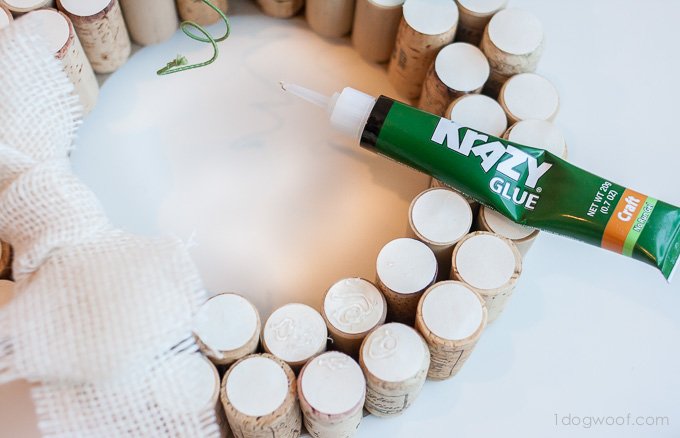 So, in this project, I used Krazy Glue to adhere the following materials – (plastic and wood) cork to cardboard, paper to cork, wire to cork, wire to paper, burlap to cork – and it all stuck! Nothing fell apart at any time. And the baby was still sleeping! Win win win and feeling good! 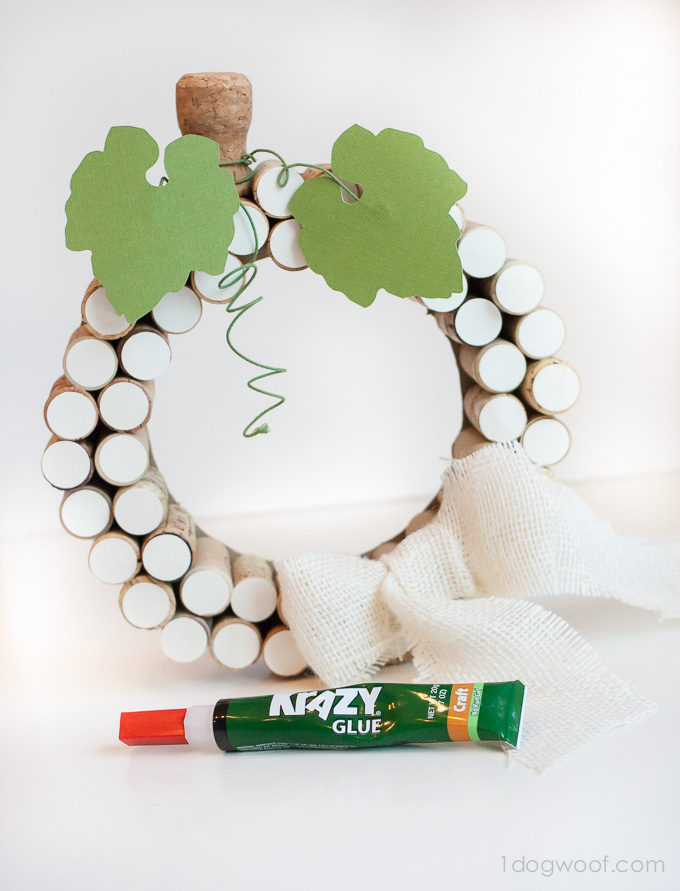 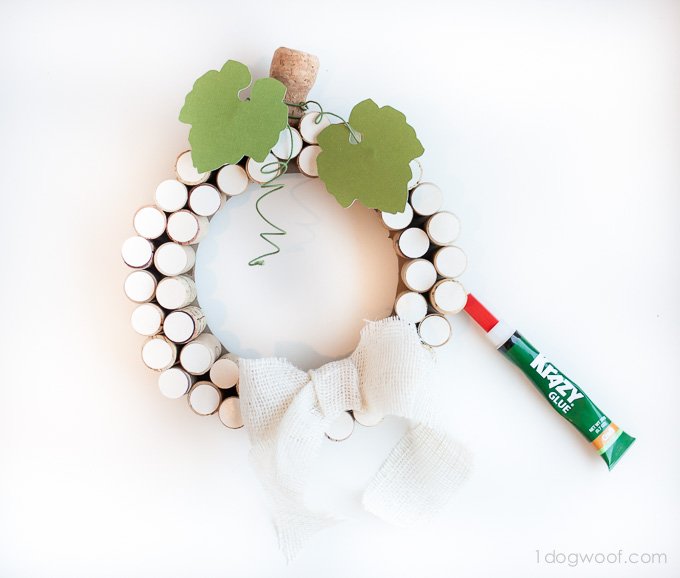 What do you think?  Pretty nifty for what ended up being a FREE project for me, right?  The “free” is just an indication that I have WAY too much stuff in my craft stash – I mean, floral wire, really?

What would you make if you could create masterpieces in minutes? 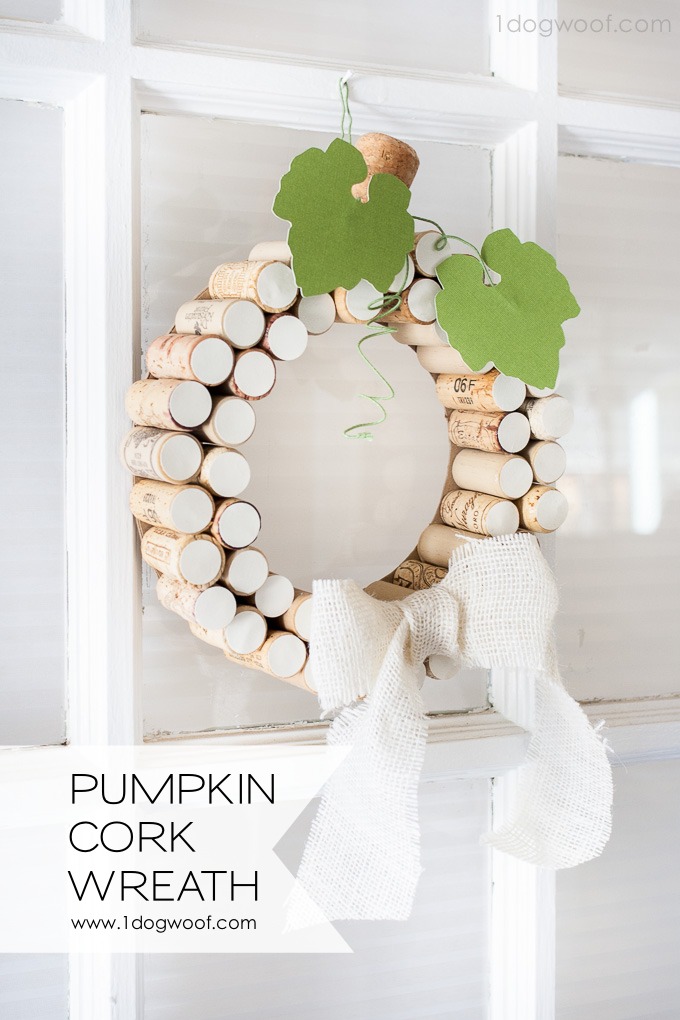 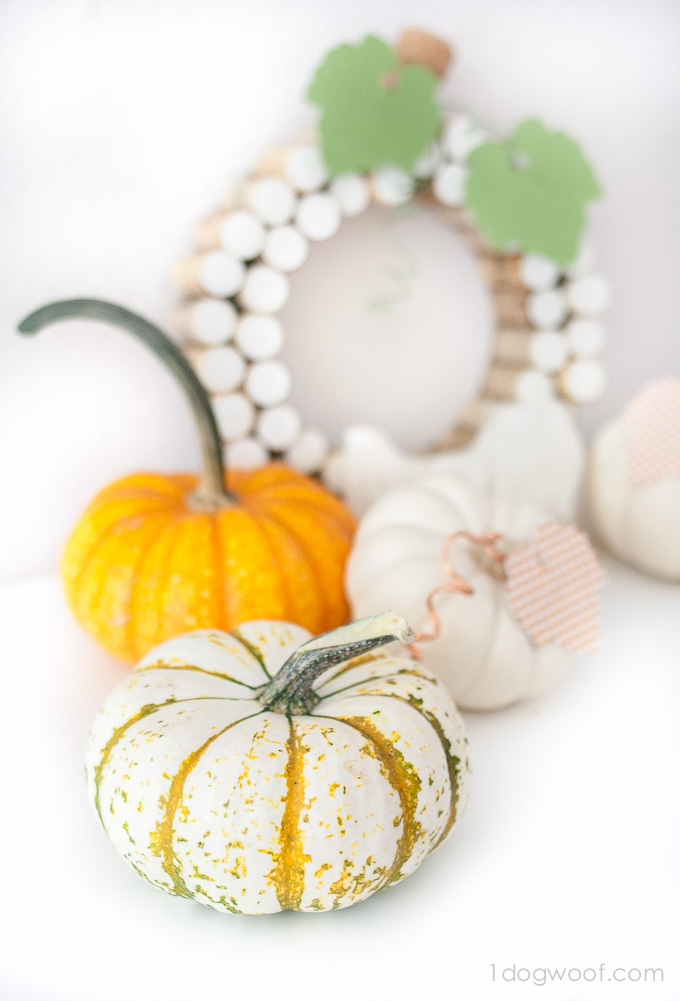