Party In My Tummy: Mirepoix and Understanding the Holy Trinity

The holy trinity?  No, I’m not getting all religious on you, it’s just that good things come in threes, at least for today’s discussion.  There’s no tip or trick or skill today, unless you count “knowing your aromatics” as a skill.  Aromatics – the good stuff that adds flavor and depth to your dishes.  Feel free to wiki it for a more in-depth explanation, but I like to just think of it as the beginnings of something yummy!

Mirepoix is a French term, and it’s just the combination of onions, celery and carrots.  It’s the base to a lot of good stews, soups, and sauces.  Normally, the ratio of onions to celery and carrots and 2:1:1, so say, 2 cups onions to 1 cup celery to 1 cup carrots, usually diced.  But hey, I don’t really measure, remember?  So I just add what I have: “an onion or two, depending on size, some celery stalks, and a couple of carrots”.  (That’s my kind of measuring).  I also dice according to what I’ll be using it for.  For a chicken broth, I’ll dice everything to about an inch; for stews, maybe a little bigger so it can handle a longer cooking time.  If I’m making butternut squash soup, I’ll dice smaller so the pieces can be blended up easier.  Throw it all in a pot with some butter and salt.  Sweat out the onions and vegetables until soft.  At this point, you can add whatever you want for whatever you’re making!

In cajun cooking, the carrots get replaced with green peppers.  This gives it a less sweet taste, and adds that distinctive pepper tang. 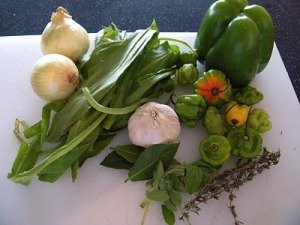 If I’m nice, and lucky, sometimes I get a frozen care package from my Puerto Rican friend’s mom – homemade sofrito.  This would be the PR version of the French mirepoix, this time made with garlic, onions, peppers and recao.  Here in the Northeast, I have yet to successfully grow recao, so if I don’t make it to the Latino grocery in the slightly sketchy part of town, I’ll make my sofrito with cilantro instead.  Again, no measurements for me.  Depending on how much sofrito I want to make, I throw in peeled garlic cloves, some diced green peppers (or ahi peppers if you can find them for authenticity), diced onions, and a bunch of recao/cilantro into a food processor.  Puree the mixture, and to make it easier on yourself when you need it, freeze it in ice cube trays.  Then, the next time you’re craving a bit of rice and beans, just pop out a cube or two for some heavenly aromatics.  For me, the ratio is all dependent on taste, just make sure no one ingredient is drowning out the others. 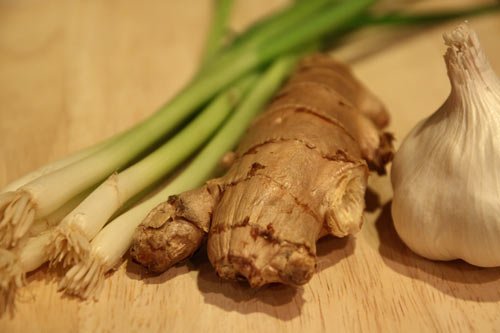 Finally, going back to my roots, the Asian trinity is ginger, garlic and scallions.  Have you ever bought that chicken from the asian grocery with the little salty gingery sauce on the side?  Swoon.  And all it is is just a pureed mishmash of ginger, garlic and scallion.  Stir-frying some shrimp?  Making some curry?  Start with some diced/minced garlic, sliced ginger and chopped scallions.  Sometimes I chop my scallions small, other times, in 1 inch chunks, depending on whether I want to be able to pick them out or not.

I’m sure other cultures have their own versions of aromatic beginnings, but these are the ones I use the most. Thai dishes often start with lemongrass and galangal, and I won’t even begin to guess at the magic that comes from an Indian chef’s spice bag!

What will you be making today with aromatics?

Check out the rest of this blog series for more cooking tips and tricks!