How to Get Good Lighting for Indoor Photos

Even if you don’t have good lighting for indoor photos, see how a small, handy camera attachment can give you a boost without resorting to flashes or bulky lighting equipment.

So, winter is coming.  No, this isn’t the beginning of a particular series of books, it means that if you live in the northern hemisphere, days are getting shorter. You’ll be taking more and more indoor photos with less than optimal lighting.  And the closer you live to Santa Claus, the less light you’ll have.

Winter means drab days, long nights, and ugly photos that are either too dark, too blurry or have that stark deer in the headlights looks of “Hey, I used flash for this photo”.  But now there’s a great little tool to add to your camera bag that will help you take bright photos indoors.  The Professor Kobre’s Lightscoop is a small, easy to use camera attachment that bounces the light from your camera’s flash off the ceiling or walls, letting that light be captured as ambient light and not a blinding lightning strike in someone’s face.

I basically take 2 types of photos these days.  One is of inanimate objects  – these are my craft projects and food.  And the second is of fast moving kids. Both types of photos require lots of light to capture well.

I experimented with the Lightscoop on random objects and my two kids, and I’m loving the results! Besides just making it easier for me to take better photos in my house at night, it’s encouraged me to shoot in Manual mode, which I’ve rarely done until now. I’ve always used AV mode, but the instructions gave specific settings in Manual, and after playing around a bit, I’m taking better indoor photos and feeling more comfortable with Manual mode in general. Win win!

Now for the proof – before and after pics!  These photos are unedited for lighting and exposure.  I’ve changed image sizes and added a watermark, but that’s it.

The three images here show 1) no flash. 2) direct flash and 3) flash with Lightscoop.  See the difference?  Love the difference?  The third image looks almost like daylike, doesn’t it?   There’s no glare and the background is illuminated as well.

Here’s another set I took, while writing this post.  Again, it’s “no flash”, “direct flash” and “flash with Lightscoop”.  The color of the mouse is also much more accurate in the third photo.  So, you can bet I’ll be using Lightscoop for taking evening indoor craft photos if I can’t shoot during the day!

Now, here’s J.  He doesn’t normally (EVER) pose for photos, but he wanted to play the other day, so I was able to get this shot.  Granted he wasn’t dodging the camera, but if I had to take this without Lightscoop, I’d have to jack up my ISO and use a tripod to get a clear shot, which is out of the question.  He’d be gone before I even set up the tripod!  With Lightscoop, the flash got bounced off the ceiling and generated much more light than was available in the room.  I love this photo! 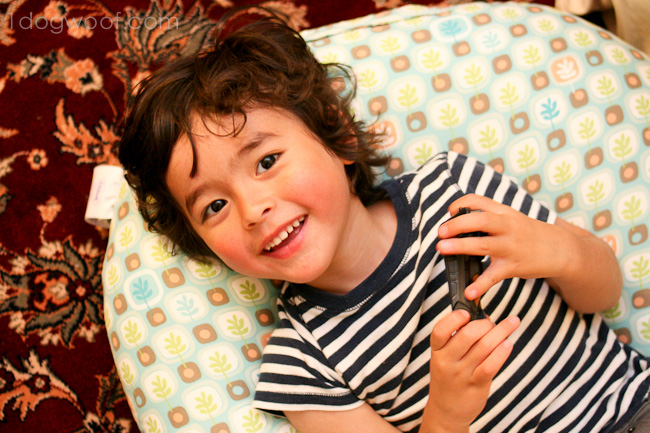 This is our Little Missus!  The shutter speed is a bit slow in this set of pictures, but that’s my normal MO when shooting at night, which is why she’s not completely blacked out in the “no flash” picture like in the craft photos above.  I did use flash for the second photo, but it didn’t bother her too much since she was awake and not looking at me.  The third photo is one taken with Lightscoop.  Again, the lighting is softer and more even, and the bounced flash didn’t make her flinch at all. 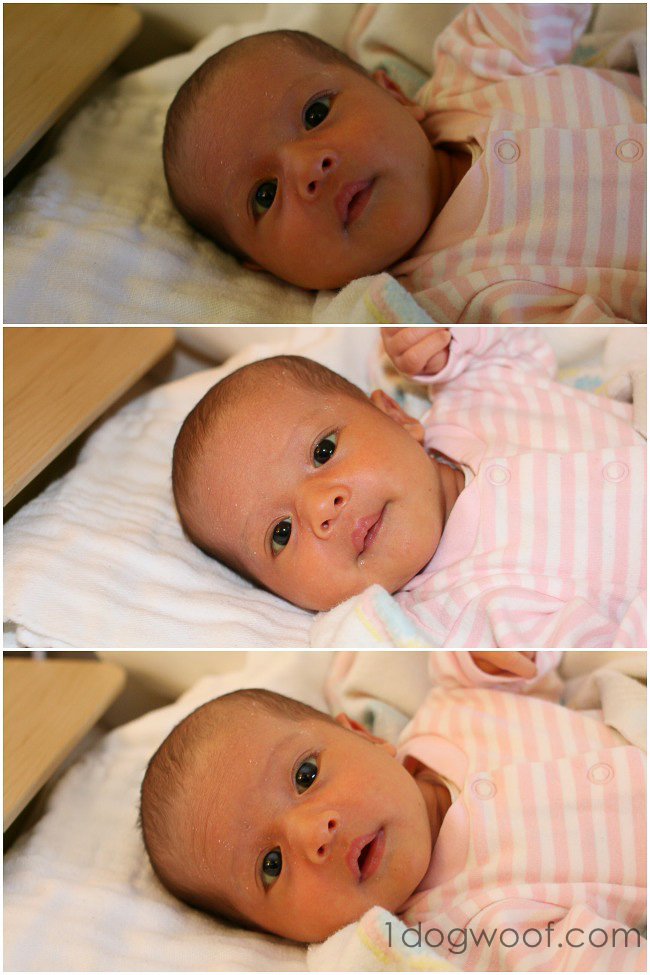 So if you don’t get a lot of natural light, especially in the winter, or it’s too cold to stage a photoshoot outside, using a Lightscoop is a quick and easy way to get a better shot than using a flash or filling your room with lightbulbs and reflectors! Remember, these days, photo quality is everything!