“I am a functionalist troubled by aesthetics.” 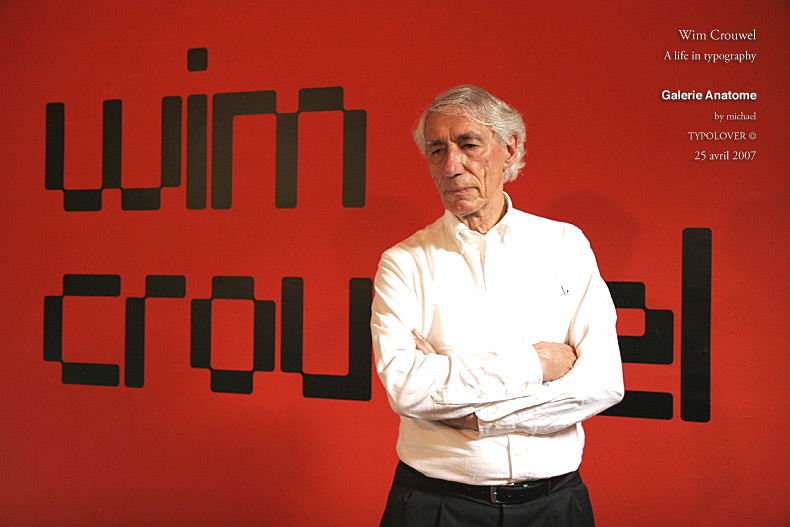 All histories start at the beginning and so I shall start at the beginning.  Willem (or Wim) Hendrik Crouwel was born in 1928 in Groningen, The Netherlands.  He originally studied painting at the Groningen Academy of Art and had focused on expressionist works, but after creating his first exhibition poster in 1952, became more and more influenced by the Swiss International Style, which emphasized cleanliness, readability and objectivity.  However, throughout his career, he chose the aesthetics of a design over the functionality, and often felt the conflict between the rational and the emotional aspects of design.

Crouwel defines a designer as one who solves problems or reaches towards a goal in an objective manner, using research and analysis to approach a problem.  In this process, the designer has to determine how to simplify both the message and the way it’s presented to the audience or client.  He feels that in our world today, we are constantly bombarded by communication and media, so that it’s extra important for a designer’s message to be clear and simple.  As we have discussed the differences between artists and designers, it’s interesting to note that Crouwel does not consider himself an artist.  He says “My work has always been for paying clients and it was really only ever about designing solutions.”

With a career that spans over 60 years, Crouwel is celebrated as one of the leading designers of the 20th century.  He is most well known for his work at the design studio he co-founded, Total Design (now Total Identity), his posters for the Stedelijk Museum in Amterdam, and for designing grid-centric typefaces New Alphabet, Gridnik and Fodor. 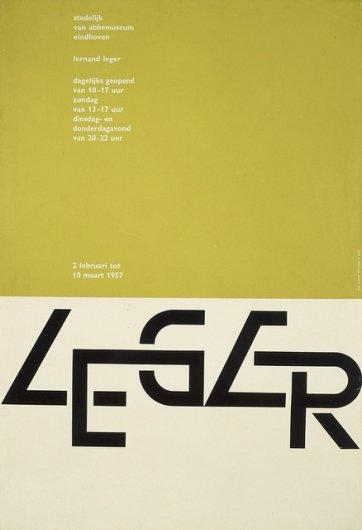 Before working for the Stedelijk Museum, he worked at the Van Abbe Museum in Eindhoven under the directorship of Edy de Wilde to create posters for artists’ exhibitions there.  He felt that it was not the purpose of an exhibition poster to interpret the work of the artist being featured, but instead to inform the audience in a neutral manner.  His posters were created to establish a consistent image for the museum and give each exhibition a distinct character but not to necessarily showcase an artist’s individuality.

In the Leger poster shown above, Crouwel took what was recognizable from Fernand Leger’s work, which were black lines around his images, and translated that into a design that spoke of the artist’s style in a typographical manner.  He put typography at the forefront of his posters from this time and as his career progressed, Crouwel became more and more adept at reflecting individual artist characteristics through the use of striking and unique lettering while still being true to his own typographic style.  Beyond the type itself, Crouwel also uses simple lines and colors to convey information with a modernist approach.

When Edy de Wilde was appointed director at the Stedelijk Museum in 1963, Crouwel followed him there and proceeded to design all the posters, catalogues and exhibitions at the Stedelijk until the end of de Wilde’s directorship in 1985.  His time at the museum resulted in what some people consider his most famous body of work in which he uses a grid system template to create a consistent visual image for the institution.  His work at Stedelijk made such an impact that the term “SM-design style” has been designated to reflect that era. 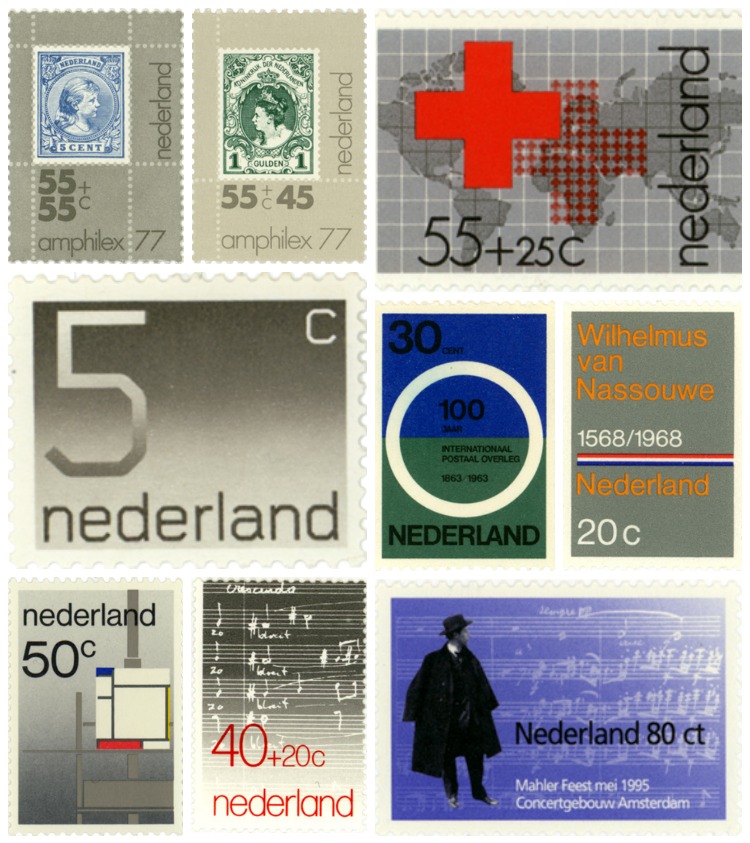 In 1963, Crouwel, with 4 other people, co-founded the design studio, Total Design.  Before the founding of TD, large projects were routinely sent out of the country as there was no studio that could handle projects on a large scale.  Total Design became the first multi-disciplinary design studio in The Netherlands that could now handle both 2D and 3D designs for corporations and other large entities.  Their philosophy was to “achieve a unity of thought” in design across all fields.  They have since changed their name to Total Identity, signifying their focus on creating a unified consistent branding for clients, and creating a total image.

While at Total Design, Crouwel created 11 stamp images for the Dutch PTT (postal service) which was then put into circulation from 1976 to 2002.  These stamps were characterized by the simplicity of their design, with nothing with the number value and the word “nederland” on it.  Each stamp uses a different color, but has a consistent gradient look.  While other stamp designs may use faces of famous politicians, Crouwel’s design is of the purest form necessary to convey the message, distilled from the De Stijl movement of the early 1900s but also relevant to modern times.

The typeface used in the Dutch PTT stamps is a variation of an older typeface design called Politene which Crouwel had designed for Italian manufacturer Olivetti’s electric typewriters. The typewriters went out of style fairly quickly and the typeface became unused, so Crouwel altered it slightly for the stamp design.  The name Gridnik was established by The Foundry when the typeface was digitized, as a nod to Crouwel’s nickname Mr. Gridnik, which his friends gave him for the prolific use of grids in his designs. 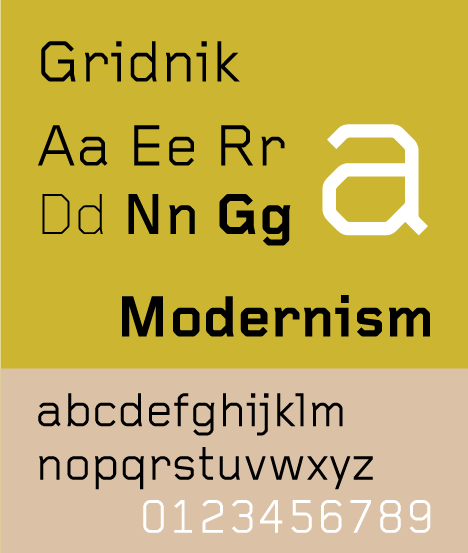 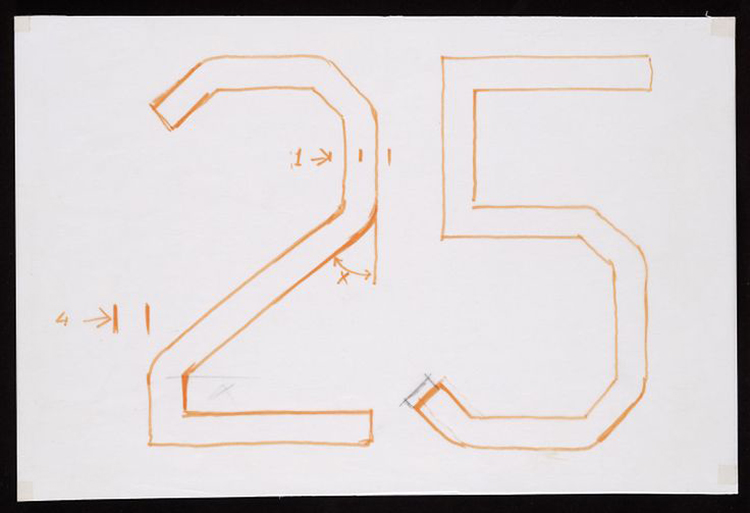 Another variation of the Gridnik typeface was used just this year when Crouwel, along with Floor Wessling and Nike, designed the Dutch soccer team’s jersey for the 2014 World Cup.  The jerseys’ official typeface is named Case Crouwel, but its structure is similar to that of Gridnik, with angular corners and uniform straight lines.  Thin striped lines are added in the middle of the letters and larger characters are emphasized with a thin border all around in a contrasting color.  To make it even more relevant to the World Cup games, each letter and number includes a Royal Dutch Football Association crest near the bottom. 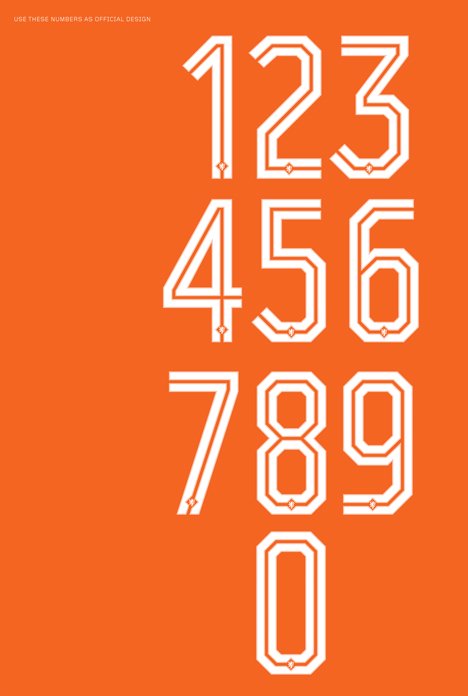 A New Alphabet for the Future

One of Crouwel’s best known contributions to the world of graphic design is his design of the typeface New Alphabet.  Living in the 60s, he felt it was necessary to not only let history determine one’s design style, but to also look into the future to see possible technical limitations and figure out how to overcome those limitations.  In our class, we’ve seen designers who have either rejected the idea of industrialization or reacted against it by reverting to an older design style.  Instead, Crouwel accepts the machine as a part of modern daily life and embraces the changes in design that can come from technological advancements.  Before he designed New Alphabet, typefaces that were being digitized and shown on simple computers and cathode ray display screens were often ugly and did not scale well.  The screens could only display vertical and horizontal lines, so Crouwel experimented with a new typeface that exploited the CRT limitation. 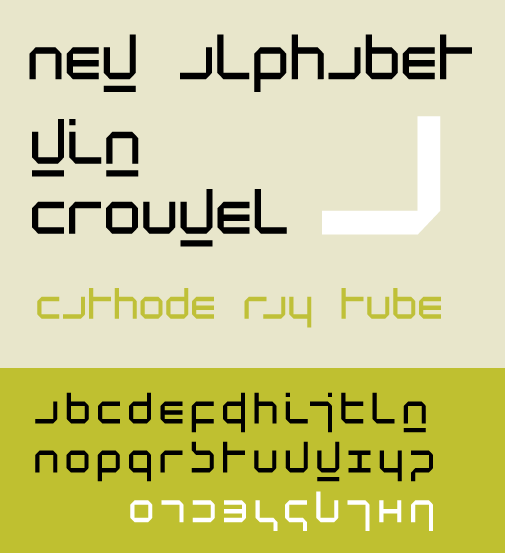 The New Alphabet is an abstract typeface and is characterized by the vertical/horizontal lines and 45 or 90 degree angles on the corners.  Letters were distinguished by small variations in the vertical lines and understrokes.  The x-height of the letters equals the width, so this typeface can be used in grid systems of varying sizes which meant it can be printed clearly regardless of the size of the screen.  When the typeface was first presented, it was criticized for being too abstract, but Crouwel maintains that it was only created as a theory and to show that designers have to push the boundaries into the future and not just let history dictate their work.

This typeface has since been digitized in a collaboration with The Foundry in 1996 and has spawned many variations, some of which are free.  Admittedly, due to the abstraction of the letters, New Alphabet is

He was also the Directory of Museum Boijmans Van Beuningen in Rotterdam from 1985 to 1993.

When the Design Museum in London launched the Wim Crouwel – A Graphic Design Odyssey, a retrospective of Crouwel career, Dezeen magazine sat down with the designer for a few interviews.

Interview: Wim Crouwel at the Design Museum 1 from Dezeen on Vimeo

Interview: Wim Crouwel at the Design Museum 2 from Dezeen on Vimeo

Crouwel is also featured in the full length documentary film Helvetica, of which an excerpt is shown here.

Excerpt from Helvetica : A Documentary Film by Gary Hustwit

“Design shouldn’t be complicated … it should also have a certain tension, be recognisable, but never stand in the way of getting out the message.” – Wim Crouwel