This is a sponsored post on behalf of Disney.  I receive product or compensation for this post, but all opinions, pictures, and tutorials are my own. 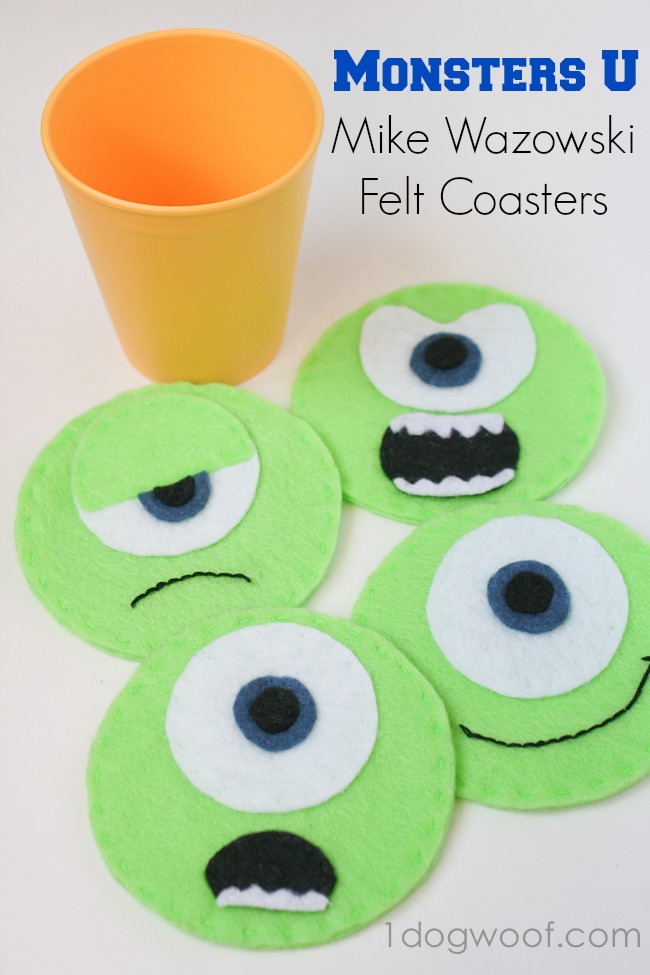 Our evenings at home usually consist of someone taking on the unwanted job of cooking dinner and someone being the couch potato and watching tv with J.  With me being in turn nauseous, then fat, then uncomfortable, and now with a baby attached to me, you can guess who cooks dinner and who is the potato.  J’s favorite shows and movies have either cars, superheroes or monsters in them, in typical boy fashion, and preferably have lots of crashing, falling, and other slapstick incidents.  So you can bet we’re pretty excited for the release of the Monsters University Blu-Ray Combo Pack on October 29th.  Well, “we”, as in “me”, since it means I’ll get a chunk of quiet mommy/blogging time while he zones out to the movie.  And this year, he’s finally starting to understand the significance of Halloween, and all the candy coming his way.  So what better time  to celebrate what will probably be his new favorite movie than some fun Mike Wazowski Felt Coasters to use at a Halloween party! (or dinner, or lunch, or snacktime, just to spice things up). 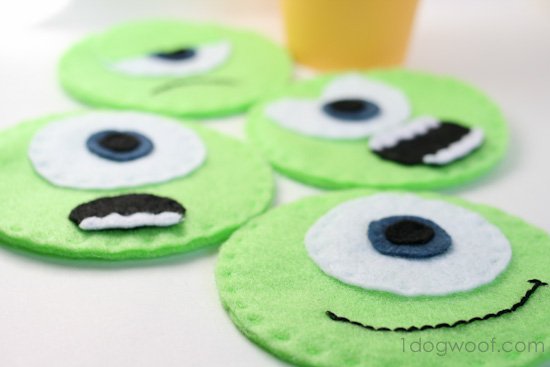 From the first movie, I was always pretty impressed at the animators’ ability to create so many facial expressions out of a character that was essentially an eye and a mouth mounted on a giant gumball.  So, my set of 4 coasters features 4 different facial expressions!  I did a quick search to see some sample images and drew out a few favorites, and then had to choose which 4 I wanted to use.

1. Use the bowl/coaster to make an outline for the coaster bases on the green felt.  Draw and cut out 8 round green pieces.  4 of them will be the fronts and 4 will be the backs of the coasters.

2. Cut out 4 circles from the white felt.  I used a circle paper cutter to create a 2.5″ diameter template and used that to draw the rounds on the felt.

3. Cut out the blue and black pieces for the pupil and irises of the eyes.  This will depend on what expressions you are making, so you’ll either be cutting out circles or half circles.

4. Cut out mouth pieces from the black and white felt.  This will also depend on the expressions you are making. 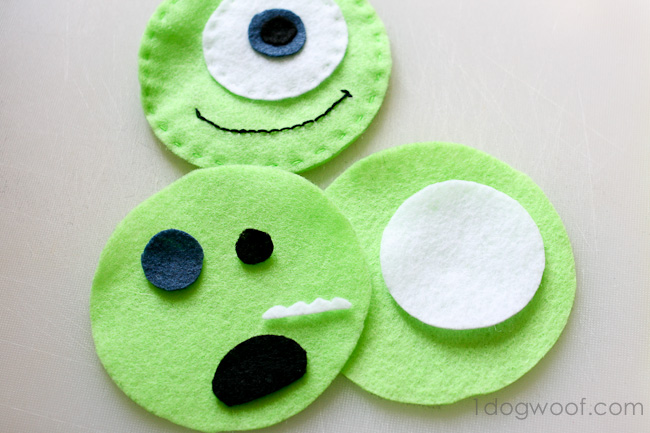 Now to start assembly.  I’ll use the “dismayed” look as my example.

5. Sew the teeth onto the black mouth piece with the white thread. 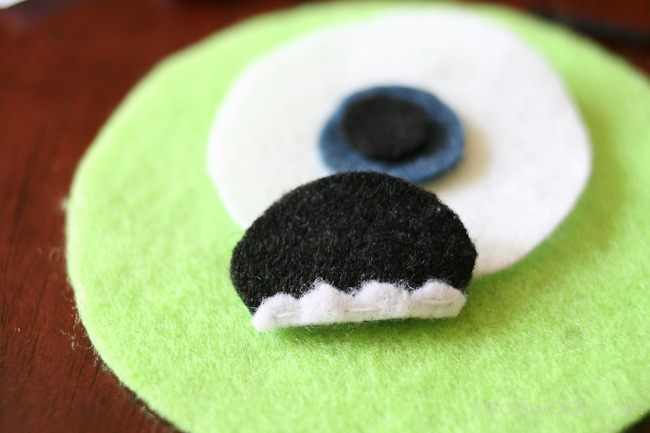 6. Sew the white eyeball onto a piece of green felt with white thread, positioned towards the top of the green round. 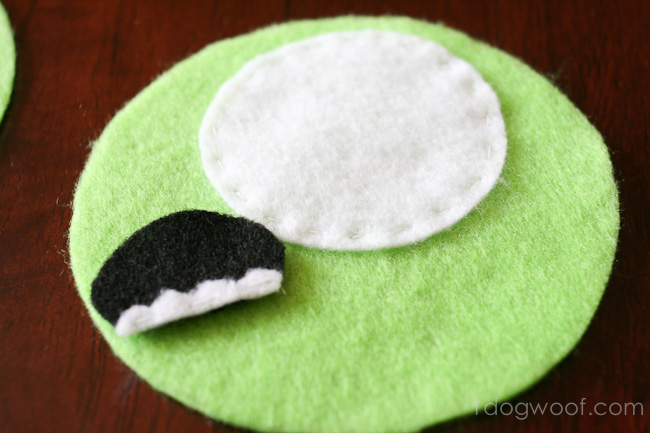 7. Sew the black and blue eye pieces onto the white eyeball.  Instead of sewing each piece on individually, I layered the pupil onto the iris and sewed an X directly through the black pupil with the black thread to secure it in place.

8. Sew the black mouth piece (with the teeth already attached) to the green “face” with black thread.  This completes one face. 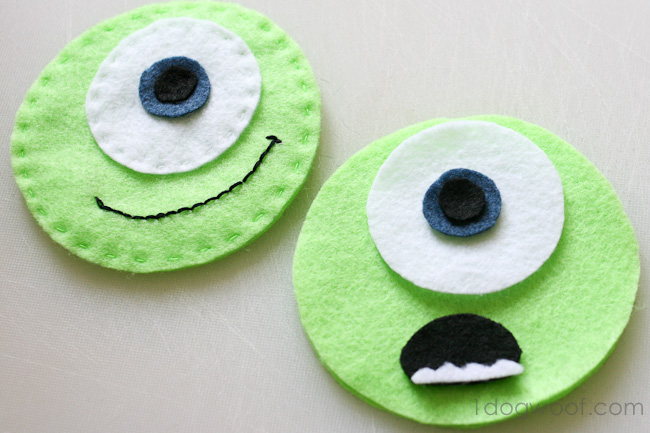 9. Layer the completed face with another green round and using the green thread, sew the two pieces together using a running stitch.

10. If the mouth is a line, use the black embroidery thread to create the mouth with a slip stitch. 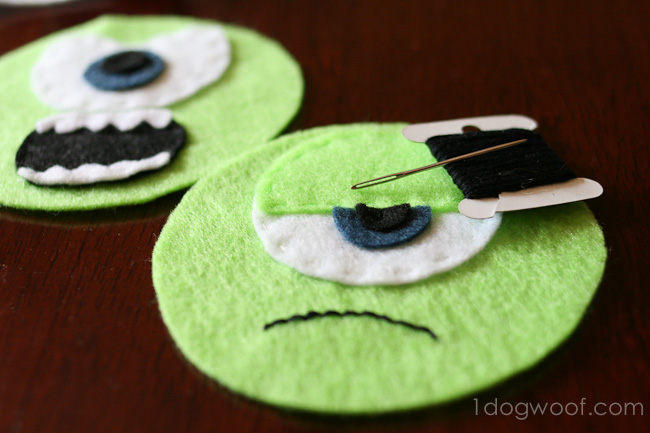 The other faces are made in approximately the same way.  Each piece on the face needs to be either sewn together first or sewn directly to the green face.  Then the coaster is finished by backing it with the second piece of green felt.

I actually wanted to use a blue button for the yes, but then I couldn’t fit a glass or a mug on the coaster evenly, so that idea was scratched.  It would have looked good though! 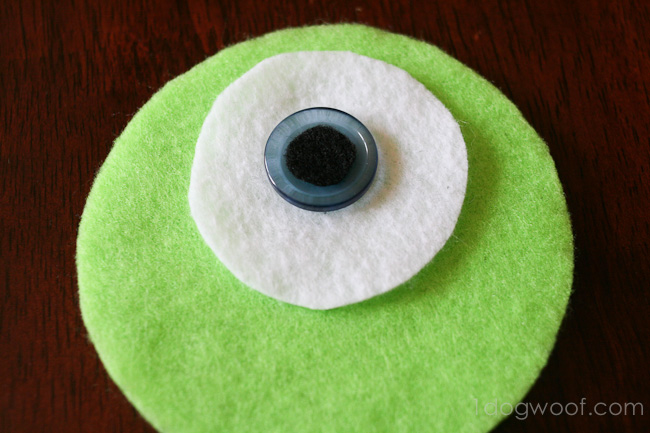 There are still a few days until Halloween, but we’ve been using our fun coasters to get ready for a holiday filled with “punkins”, superheroes, monsters, candy, and costumes.  We might even attempt trick-or-treating this year, if he doesn’t completely wig out and melt down.  He does understand the importance of candy these days, so it looks promising so far!

If you’re an eager beaver and want as much Monsters University as you can get your hand on, you can: