Coming home from work, and having a kid who wants nothing more than playing outside in the yard, means that I don’t have a lot of time to make an elaborate dinner.  You’d think I could just let the boy and the dog go at it in the fenced backyard, but nooooo, of course they want to be played with.  SO.  Thank goodness for good ol’ fried rice, my favorite fallback one pot wonder! 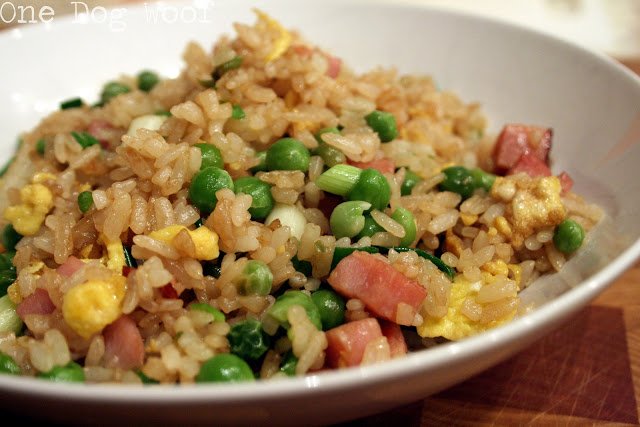 I never make it the same way twice, since it’s all about throwing together what I have in the fridge on any particular day, but here’s one fairly normal version:

small bowl of diced ham (from a leftover ham) 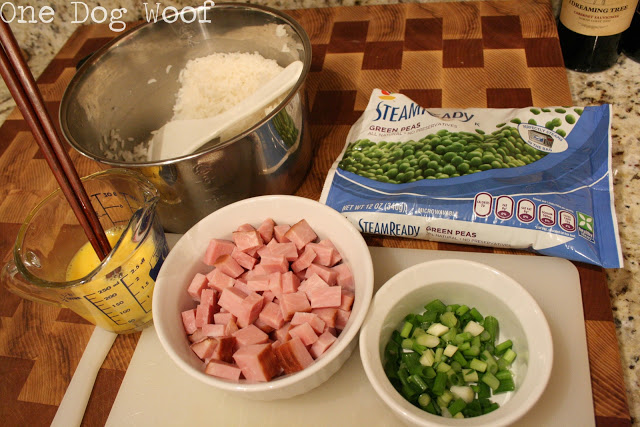 1. Start with some oil in a wok, usually a couple of tablespoons, over medium high heat.

2. Pour in the beaten eggs.  Scramble.

Now start adding the other ingredients, while stirring and integrating it all together after each new addition.

3. Throw in diced ham.  Since the ham is already cooked, we’re just warming it up. 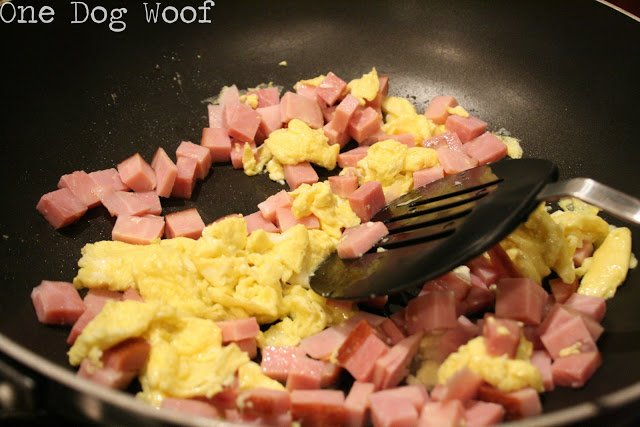 4. Add the leftover rice.  It’s best to break it up prior to adding to the pan, so you don’t have a huge frozen hunk of it in the pan with nowhere to go.

5. After the rice goes in, drizzle some extra oil over it all, to keep it mixing well and giving it a nice glossy look.

6. Add the peas.  These are also already pre-cooked. 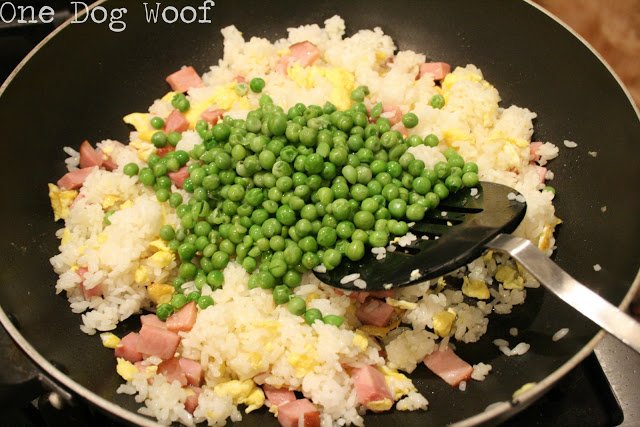 7. I add a splash of soy sauce or a tsp of salt for seasoning.

8. Add the scallions as a garnish.

9. Stir together, and serve!

Our trick for this dish is to have most of the ingredients pre-cooked, so it’s just a matter of assembly.  Drew likes to call it compartmentalized cooking.  I call it a lot of extra pans to wash.  The other option is to cook the egg first, then take it out and set aside.  Cook everything else, except the rice, together.  Then add the egg and rice back in, with some extra oil, and season it at the end.

The fun of this dish is really in all the different ways you can whip this up. Really, it’s just rice + scrambled egg + whatever else you want!

Try some peanut oil or sesame oil instead of vegetable oil.

Add leftover rotisserie chicken instead of ham.  Or bits of sausage.  Or shrimp.  Or BACON!

Scallions can be replaced with chopped leeks, chopped onions or chopped shallots.

Mushrooms are a great addition, or maybe baby corn, or kimchi!

I’ve added ketchup instead of soy sauce (no seriously! it’s really very good!  Sweet and tangy all at once.)

Drew likes a dollop of sriracha on his serving, but I don’t add it into the general mix, you know, because of little boys. 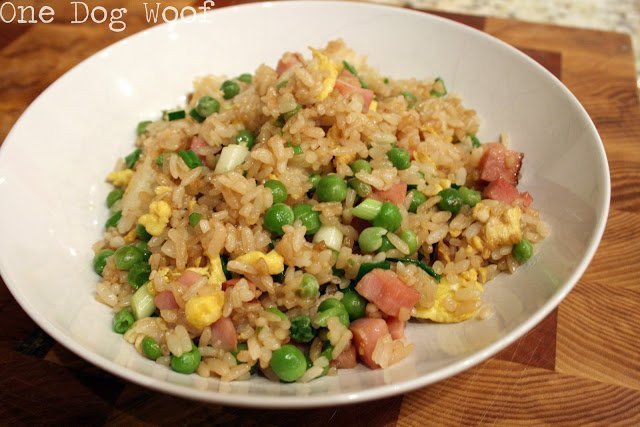 The possibilities are endless!

(Although, come to think of it, I’ve really kept to asian or neutral ingredients. I’ve never added Adobo or plantains or cheese or rosemary, etc.)

Have fun with it, and if you try something funky, let me know how it goes!