A Turtle and Its Shell – Our Cross-Country Road Trip

Welcome to my new impromptu series on our cross-country road trip as we make our way from New York to San Francisco for my husband’s new job in Silicon Valley.  I figure since this isn’t something one does often, I should write about it and share it with you so you can live vicariously through us and not go through the actual trouble of driving across the country.  Since we’re moving into temporary corporate housing and our belongings are traveling separately, we are carrying everything that we think we’ll need for the next month, hence my series title of “A Turtle and Its Shell”…because that’s what we are.  We are free as a … turtle, slowly but surely plodding our way across the US. 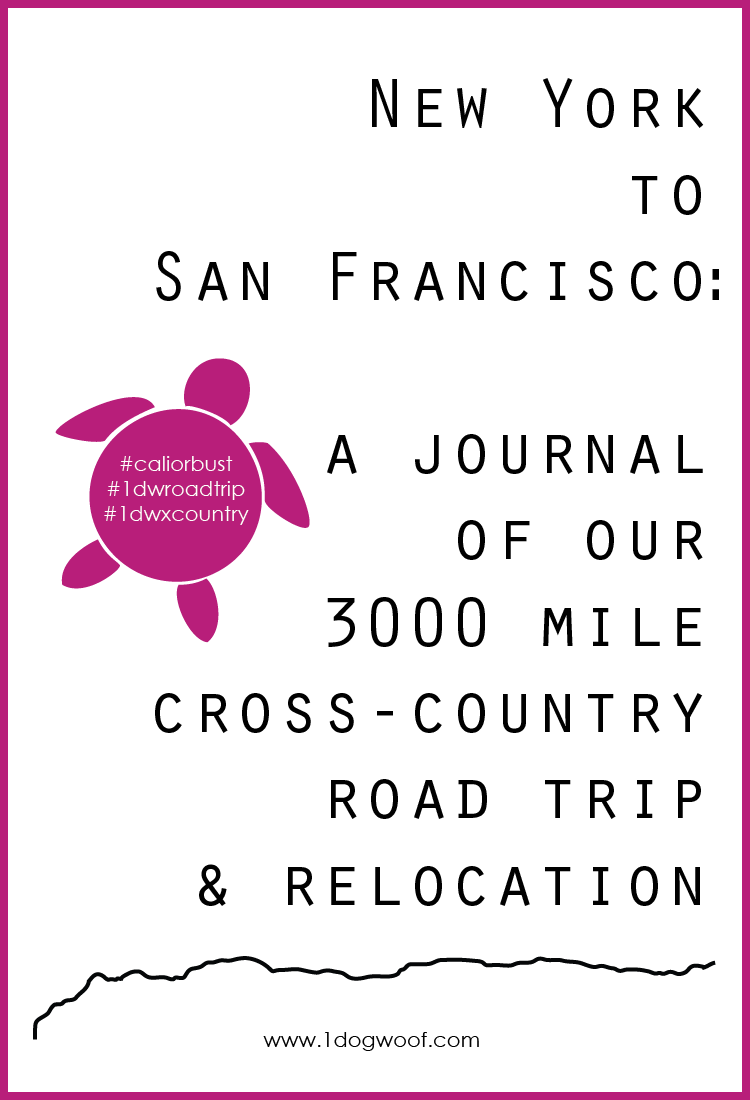 To say that the last few weeks have been hectic would not even cover it.  Would you believe that from the day my husband received news of a  job offer to the day we drove away from our beautiful home was only 30 days?  That’s 30 days to clean, sort, sell, pack and move over 2000 sq ft of house, while juggling 2 kids, 1 dog, 2 classes, a friend’s wedding and a trip to Haven Conference.  I told people I was up to my eyeballs in just stuff that needed to get done.  Towards the end there, it was more like I could barely keep my head above water.  Each night, I made a decision to clean, to pack, to do homework, or to sleep.  One night, I could barely concentrate while watching Thor (which really doesn’t require a lot of concentration) so I figured I’d just sleep, since there was no way I was going to be able to concentrate on Color Theory, yikes.

Our yard sale ended up going very well, with us making a fun sum of money while getting rid of everything we needed to get rid of.  Admittedly, a few things walked themselves back into the house, but it was not much and I didn’t have the brain power to care at that point.  We then worked on staging our house for listing photos, which you can see here. 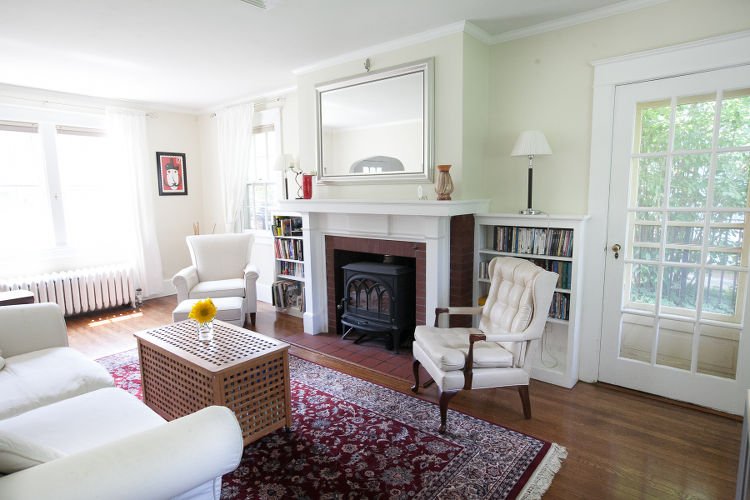 Then, it was the mad rush to clean out all the clutter in the house because the movers will pack up the garbage just as easily as they will pack up your fine furnishings.  I had no idea how much clutter we had until I had to clean out every nook and cranny.  I also had to sort everything into what was to be packed and shipped versus what we were going to take with us.  And this is where Yakima roof racks came in to save our day.  They very generously provided us with a Whispbar roof rack system with a SkyBox 16 Carbonite so we could pack pretty much twice as much stuff as we otherwise would have.  That’s also why I feel like our family is one big turtle.  We’re driving a Jetta Sportwagen with a Skybox on top, all of it so completely loaded down that we are seriously low-riding and seriously hoping we don’t hit any major pot holes on the highway! 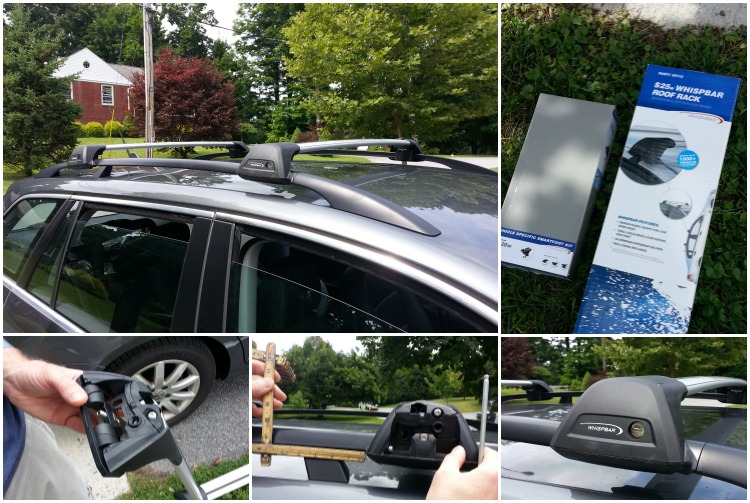 The roof rack was installed pretty easily although it was a bit daunting to be faced with all these pieces that needed to be put together.  I have no idea how to explain all of it except that there were screws so the ensemble could be clamped onto our car’s side rails.  As for the SkyBox installation?  I wouldn’t know, since my husband went to the freight yard to pick it up and installed it in their parking lot while I was at home watching the movers pack up my life.  The cargo box clamps onto the rails and opening/closing/loading is super convenient. 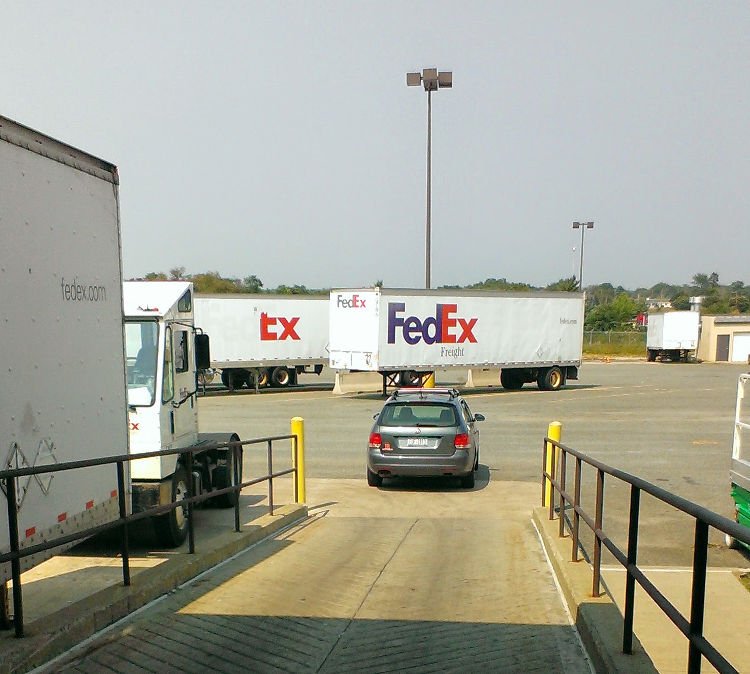 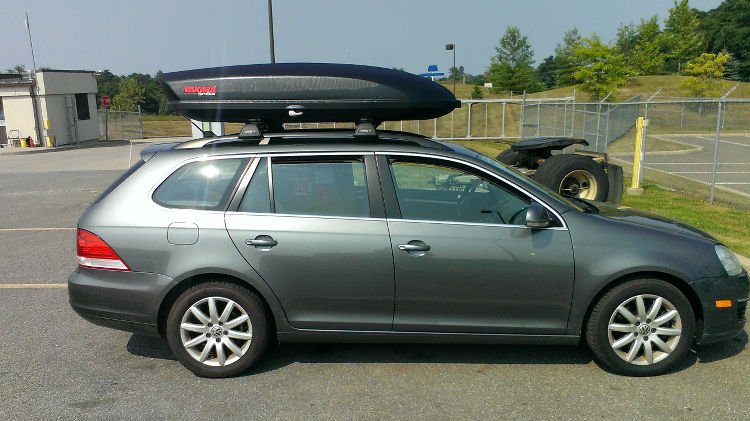 The amount of stuff we fit into the car and SkyBox might blow your mind, but it was approximately 2 large suitcases, a large plastic tote, a few small plastic totes, diapers, blankets, our important papers, a few important buckets of paint (#thelifeofacrafter), a cooler, a tool bag, supplies for finishing up my classes online (#thelifeofastudent), toys, a travel crib (#thelifeofamom) and whatever other little knick-knacks you would normally take for granted until you realize you’d have to live without it for a month and then try your dang hardest to fit it into that little corner in the trunk next to the bungee cords.  How that’s for a run-on sentence? 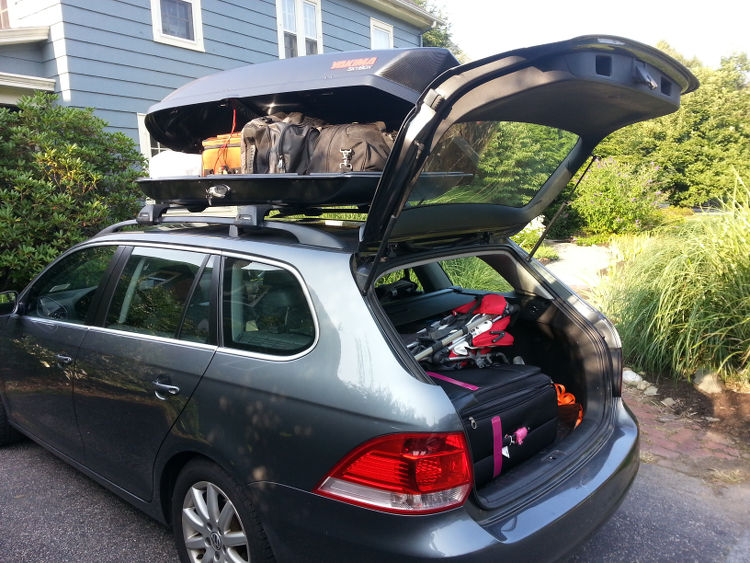 This isn’t even the half of what we eventually stuffed in.  Both the trunk and the SkyBox still closed without a problem! 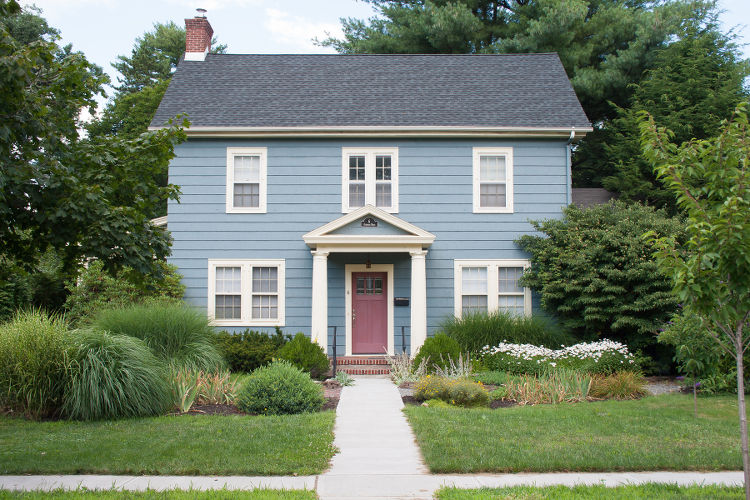 Oh, the tears.  I really try not to cry in front of my kids, but it was definitely sad, sad and more sad to see our house empty, to lock up and walk away.  We’re excited for our new adventure, but this was our first house as a couple.  I was carried over the threshold as a new bride.  We brought home a new puppy and two new babies.  There are memories of a kitchen remodel, new landscaping, home decorating, new office, new paint, and of course the laughs, the tears, the sleepless nights, the Lord of the Ring marathons, the Thanksgiving dinners, my first real Christmas tree, relaxing on the hammock, birthday parties, game nights and just quiet evenings when life was simpler and I had time to crochet.  (Ok, so the run-on sentences aren’t stopping any time soon).  When the movers finally left, my husband and I were in this indescribable frenzy to clean up and get out of the house.  Maybe because both kids were rolling on dirty floors with nowhere to sit and nothing to occupy their attention.  Or maybe it felt uncomfortable to hear your own echo in your ex-bedroom.  Or maybe it was the dawning realization that we would now be somewhat homeless and without a stable address for awhile.  Either way, we just wanted out.  I didn’t want to say goodbye; I wanted to remember our home the way it was, and this empty shell is for someone else.  Still, as we sat in the car and looked back for the last time, the tears couldn’t help but leak out.  J reached his hand out the open window in longing as he realized he was leaving.  LM was in baby bliss.  I saw the last 7 years flash before my eyes and then steeled my heart and turned away.

We spent a quiet evening at a friend’s house and started on our trip the following morning.  We had the plan of stopping somewhere in Pennsylvania for the night before continuing on to Chicago, but we got a bit crazy and decided to just make a break for it.  Call us crazy, but we stupidly made it to Chicago in about 15 hours and collapsed upon arriving at my in-laws.  Good thing they wanted to spend time with their grandkids, so Drew and I got some rest the next day, and I got a chance to finish up some homework.  Yup, I even brought along my scanner and acrylic paints so I could stay up until 2am in the morning finishing up a final project.

As for being on the road, we couldn’t even feel the Yakima SkyBox sitting on top of us.  There was no extra sound, and it didn’t leak even as we (Drew) drove through some driving rain. The SkyBox has a dimpled texture which I’m told by the husband makes it like a golf ball and gives it better aerodynamics, to which I just nod and smile and think about what else I can cram in there.  I had the idea of taking pictures of each state crossing but I fumbled EVERY SINGLE one of them.  Either there was no sign (Pennsylvania) or I wasn’t ready with my camera (Ohio) or the sign was hidden behind trees (Indiana) or it was too dark (Illinois).  I didn’t get a single decent photo.  Bad blogger!  So here’s all I got, when we stopped in Ohio, and even this is from Drew’s phone, not mine.  Yeesh. 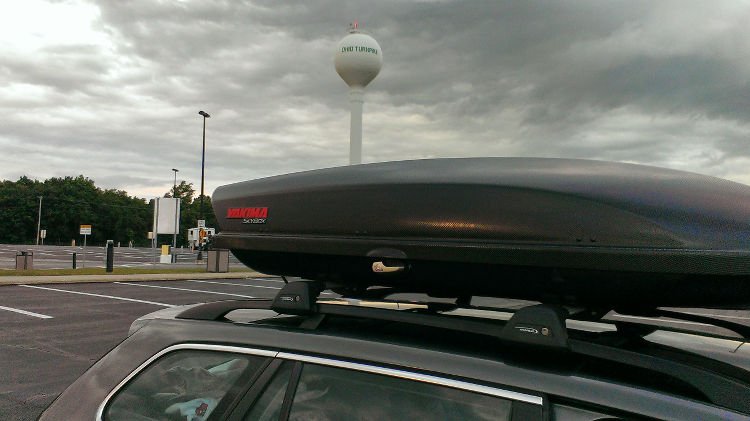 Nap times were glorious.  The rest of the 13 hours were not so glorious.  Between the Harry Potter audiobook, my husband’s choice of music and the incessant chatter of a certain little boy, I started longing for silence.  Sweet sweet silence.  I don’t remember the views of the countryside, but then again, I’ve seen it many times before so I wasn’t really paying attention. 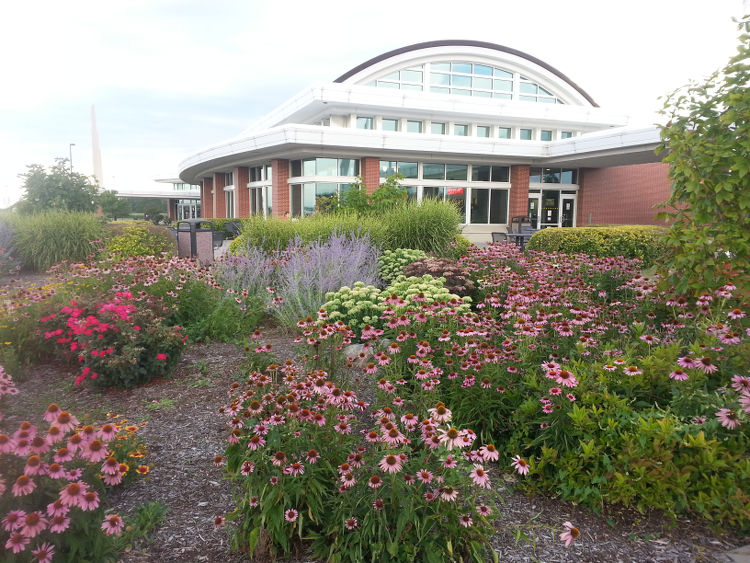 From here on, our days should be a bit shorter, with some sight-seeing along the way (and some more homework at the hotel at night).  My nightmare scenario is breaking down on the salt plains when we get out to the deserts of the West, so we’re stocking up on water bottles and sweet tea, Ibuprofen and bug repellent, a la Oregon Trail.  Hopefully, we won’t have to hunt buffalo or cross rivers on wooden rafts…

Our next leg will take us from Chicago to Lincoln, NE.  Stay tuned!  Follow our adventures in real time on Instagram!  My big camera is somewhere in the black hole that is my trunk right now, so most photos will be phone photos until we stop somewhere long enough for me to dig it out…

After Lincoln, we visited a train museum in Nebraska, and then the salt flats in Utah!

← Preparing for a Successful Yard Sale, and for Our Big Move! A Different Type of Home Tour... →