Sorry for the somewhat sad and slightly downer post from yesterday – we just got back from a great weekend, it was a back-to-work Monday, and being asked if you’re pregnant didn’t add to the post-vacation blues.  I had a bit of a self-esteem moment.  But, like I said, it was a great weekend (minus the preggo bit), and here are some pictures of what we were up to.  My sister and I threw my mom a birthday bash!  It was a ton of work, and the kitchen was going going non-stop until the very last minute, but it was totally worth it.  My family came, as well as several of my mom’s old school friends – even elementary school friends!  Talk about some serious friendships!

I basically “designed” the look of this party using Pinterest.  If you’re a follower of mine on Pinterest, you would have seen a board filled with drink ideas, circle garland ideas, and appetizer ideas.  I had grand plans for the tablescape, and if you had asked me last Wednesday how it was coming along, I would have sounded a bit worried/resigned – my grand plans don’t always turn out grand.  BUT – it did this time!  There was definitely a bit of extemporizing and some last minute change of plans, but I love the way everything turned out! 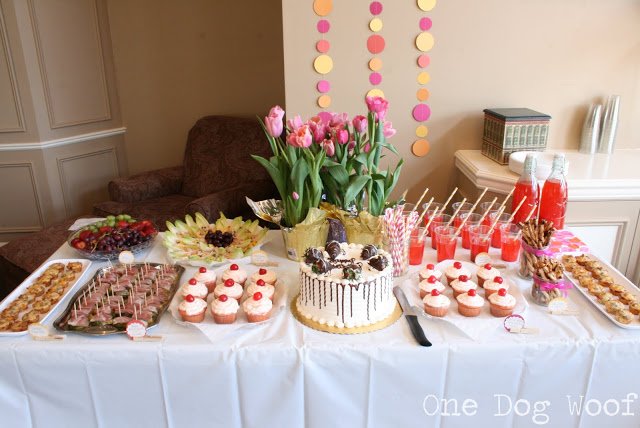 The most popular of the appetizers was the Shrimp salad on Belgian Endive leaves – it was light and refreshing and a quick bite (inspiration).  Check out the awesome milk bottles I found at Home Goods!  I’ve been craving these bottles as they remind me of la carafe d’eau from France.  Anyways, it’s filled with a sparkling strawberry lemonade (inspiration).  Yum!  The centerpiece was inspired by this pin, but I ended up using live tulips in pots, since my mom wanted to be able to plant them afterwards.  I had bought a circle cutter, and found a scalloped punch on clearance at Joann’s, so I put together little menu placecards. 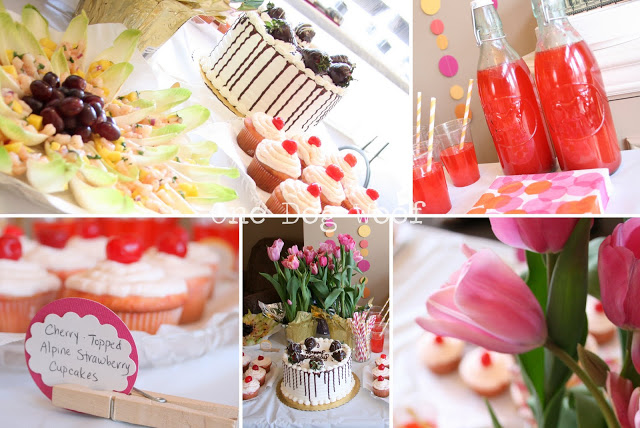 The plastic utensils were from Target, and they just sat in some mason jars embellished with a bit of ribbon.  I bought the striped straws from Etsy.  The jam sticks were twisted puff pastry jam sandwiches (inspiration), and the brussel sprouts with prosciutto were also a fan favorite (inspiration)! 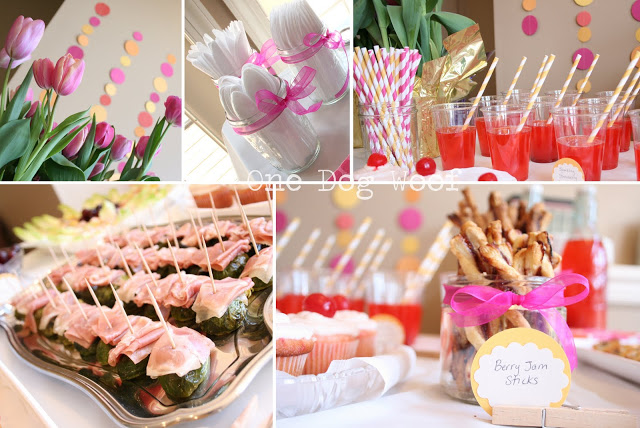 The circle garlands were cut from cardstock with a variable circle cutter and sewn together (inspiration), and NO, I didn’t make that cake!  (Are you kidding me?  I can cook, but I can’t bake!)  It was ordered from Chocol8 Kiss, a local bakery, and it was DELICIOUS!  I also ordered a huge tray of Pad Thai from a local chef, then provided a sort of “Pad Thai bar” full of condiments to put on the Pad Thai, like cilantro, bean sprouts, basil, scallion and limes.  The bowl in the middle was eventually filled with some potent chinese hot sauce.  My sister (the baker) made some pizza puffs using mini muffin pans (inspiration).  She also made the cupcakes (inspiration). 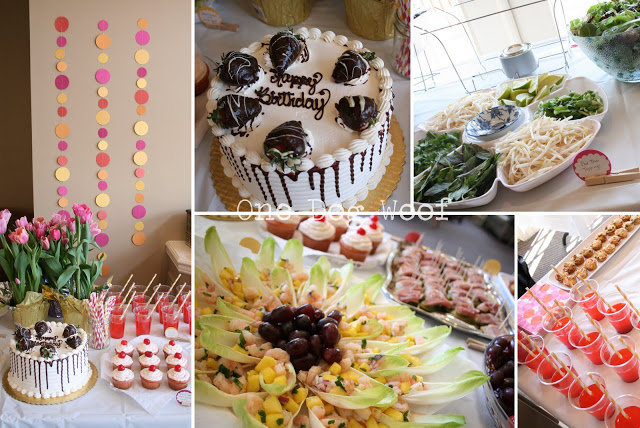 This is the food table.  My parents made everything except the Pad Thai.  There was Chinese Mustard with Shitake Mushrooms, Chicken Chassuer, a grilled pork loin, and Ham-wrapped Asparagus spears.  Are you drooling yet?

Don’t mind the garbage can in the shot.  Can you tell?  I wasn’t really paying a whole lot of attention, just trying to take as many pictures as possible before the guests arrived! 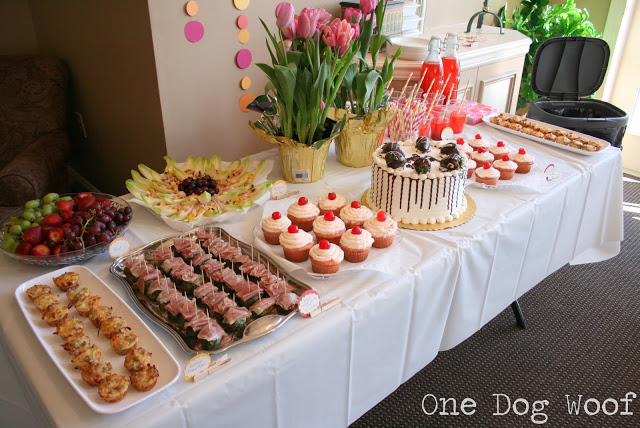 There’s our little family!  Big J is sporting his matching bowtie and suspenders that I ended up hand-finishing because I ran out of time. 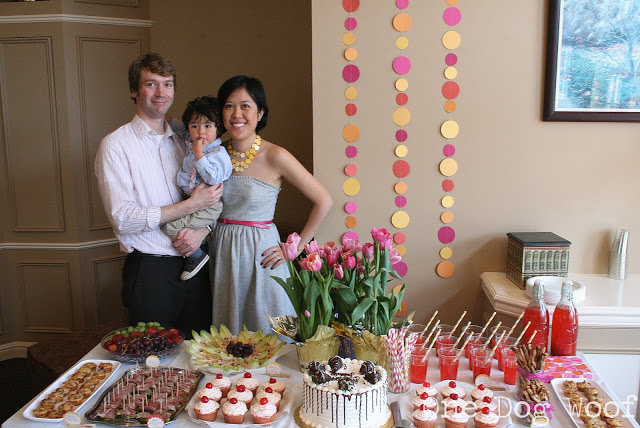 I hope you enjoyed this feast for the eyes.  Just going through the pictures again makes me hungry!  I’ll provide separate posts with some recipes and simple tutorials for the little crafts I made, but it was really very simple (a little time consuming), thanks to Pinterest!

If you have any questions, drop me a line, but just make sure I have a way to contact you!